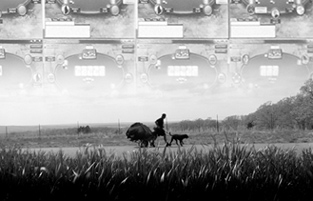 The sun is shining and a man is shown walking along an isolated road (where are those?) bordered by tall, thick grass with two dogs tramping at his side. He is pulling a cart and stops, pulls out his violin and masterfully creates an ambiance of light-hearted bliss with classical music amidst this pastoral bucolic setting.

“Drawing Dead” shows Mike walking across America, from Seattle to Boston, and I’m relieved he’s not my son.

Mike is one in about 3 percent of Americans who are pathological gamblers. He has sacrificed at least two college chances, numerous friends and all his money to gamble his way to Hell. In the film, he embarks upon another trip to cleanse himself and start anew. When he reaches Boston, his plan is to give a short address at a conference on gambling addiction. He’s got nine months and four pairs of walking boots to think about what he will say.

“Drawing Dead” is a production of first-time filmmaker Michael Weeks, who grew up bonding over poker games with his dad. They played throughout his school years, but when he hit college and the availability of online gambling, a whole new dimension to gambling emerged. Therefore, Weeks understands the burgeoning phenomenon of gambling addiction and has made a film investigating the paths of two men about his age who have been involved with poker as a daily distraction.

Our busker en route to the east coast, Mike has lied, stolen and sacrificed all that is dear to him to pursue gambling. Juxtaposed to him is Dusty Schmidt, a wanna-be pro golfer who had a heart attack at 21. Searching for another way to make a living he discovered another game. Now he is a sponsored online poker player, earning $40,000 to $50,000 a month. He spends his days playing 18 screens at the same time, pausing only to urinate in a plastic container. He denies addiction.

The film is interspersed with poker terms and quotes, often acting as metaphors directing the audience to think on different life levels. One such screen reveals the title of the movie, “Drawing Dead,” and defines it as “having no chance to win, regardless of the cards yet to be dealt.”

Walking along the Columbia River yesterday with Bill, a therapist specializing in addiction, I explained this documentary and asked about the chances for a “cure.” Of all the addictions he’s treated, gambling has been the hardest. While he has had no success, he says there might be about a 10 percent general success rate in the field and then adds, “No, Bev, there is no medication out there that can fix this.”

In the film, Weeks explains, “The most dangerous part in the mind of a gambling addict, once the financial hole … is deep enough … is to place bigger bets, to gamble more and more. … As an addiction grows, an addict is physically changing the way the brain works. It alters the way they think.”

When you eat something delicious when you are hungry, when you get a little rosy from a glass of wine (or two), or when you smoke marijuana, dopamine can be released in your brain reinforcing the activity. To make the activity pathological, the individual must continue with the activity despite harmful negative consequences or a desire to stop. The brain adjusts and the dopamine-fueled activity must be pursued ever more relentlessly until there is no longer pleasure, just a blinded drive to avoid withdrawal.

“Drawing Dead” plays this Thursday night, April 4, at 7 p.m. at the Northwest Film Center. Tickets may be purchased online HERE. 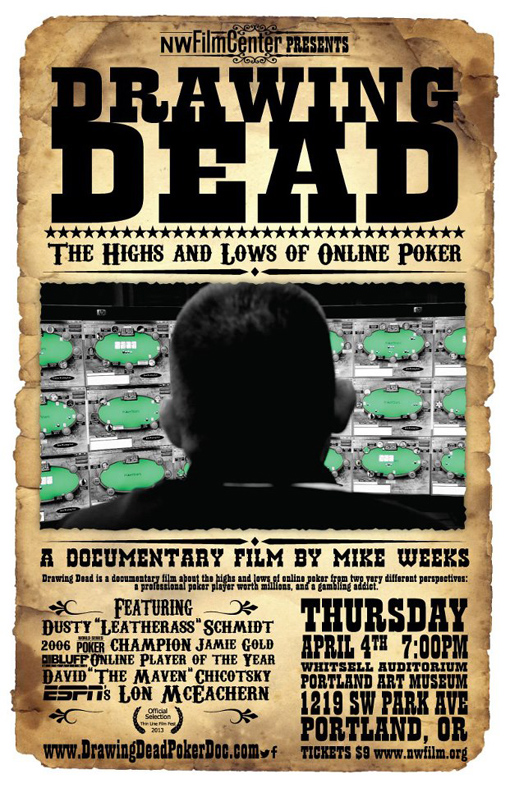