If this take on Eddie the Eagle (Michael “Eddie” Edwards) is exaggerated to the point of absurdity, the superb performance of Taron Egerton makes it work. This may become the breakout performance for Egerton, showing he can do the touchy-feely role as well as the easier tough guy roles. Egerton combines just enough of Forest Gump with just enough of Rocky to keep a simple story simple. The result, if mostly a showpiece for the lead, is thoroughly enjoyable. In the end, it is not about winning or losing, it is about showing the world what you can do. 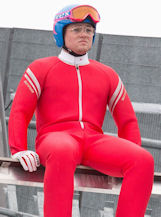 Taron wraps himself around this breakout performance the way the original Eddie wrapped himself around the ski jump. After relatively predictable performances as a minor crime figure in “Legend” and a spy super-hero in “Kingsman: The Secret Service,” he is forced to get up close and personal as a loser who transforms himself into a winner by sheer force of will.

A slight exaggeration? No doubt. Melodramatic to the point of tedium? OK, in places. In the end, are you genuinely happy for Eddie? You bet.

If there is hope for people like him, there is nothing any of us cannot do.

In any athletic hero tale, there is an outcast coach down on his luck who sees the spirit in the young contender and shows him the path to, well, at least relative, success. Played by Hugh Jackman, coach Bronson Peary meets up with Eddie when he is undergoing his first few hilarious pratfalls of ski jumps. Although everyone is sure Eddie will kill himself on the lethal ski jumps, Eddie does not die. In fact, he recovers readily, which suggests that he was never quite the wimp the screenplay makes him out to be.

In fact, he might have been a fairly talented athlete who simply grew up on the wrong side of the Olympic tracks and was not able to while away his childhood in training like the rest of the professional amateurs. In the end, he achieves a profound victory by showing that what was originally an amateur competition is still accessible by real amateurs.

One only hopes that we do not see a spate of paralyzing injuries as others try to emulate the hero. They are probably locking up all of the practice jumps around the world at this moment. Also, one suspects rules regarding even officially practicing in lethal sports have been tightened considerably since the 1988 Calgary Winter Olympics.

The screenplay is reminiscent of “The World’s Fastest Indian,” about New Zealand land speed racer Burt Munro (played to the hilt by Anthony Hopkins) and his Indian Scout motorcycle. Although both stories were modified considerably, outstanding performances pull both movies out of the fire.

An amazing supporting performance by Jo Hartley, as Eddies ever faithful mom, is the lynchpin to this flick. And there is a surreal cameo by Christopher Walken as emeritus Olympic coach. See it if you dare. 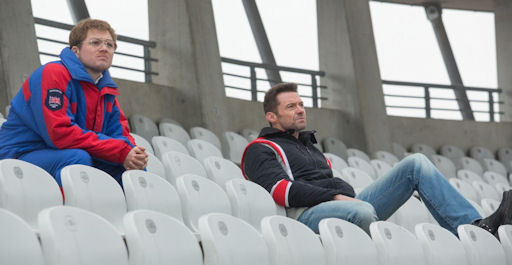