Arriving as an ex-pat now from Paris, hauntingly beautiful Nada returns to her war-torn Lebanese village to find her abandoned old home ransacked and its property full of garbage. “Go Home” is written on the inside of the walls after she returns from hearing a noise outside. She’s sure that the neighbors, during the Lebanese Civil War, are not only responsible for the desecration of her home but her grandfather’s death. 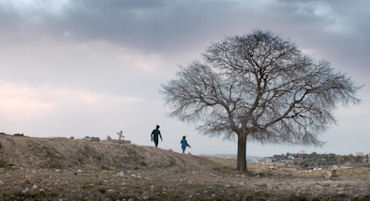 As Nada, played by an accomplished Iranian actress named Golshifeh Farahani, sifts through debris littering her yard, she imagines that her grandfather is also buried in this chaos. She claws the ground in a frustrated, aggrieved frenzy.

Lebanon is the perfect setting for this story by Lebanese-born writer/director, Jihane Chouaib, who herself went into exile in 1975. During the 1975-1990 Lebanese Civil War duplicitous relationships, conniving plots and vengeful destruction obliterated what had previously been called the Switzerland of the Middle East. Reminiscent of refugee experiences throughout eastern Europe, Africa, Latin America and now Syria, “Go Home” takes us to the next phase, the return.

Nada represents the thousands of immigrants who left their homeland because of violence and return to re-establish a connection and identity. But returns can create suspicion, resentment and the re-generation of old feuds.

Nada finds herself in a mental struggle with her brother, Sam, played with distinguished charm by Maximilien Seweryn, who also comes to Lebanon on the wishes of their father. to represent her family. He tries to convince her that selling the old family home and leaving Lebanon is in their family’s best interests. In not accepting this, Nada breaks with traditional family fealty and doggedly searches for the truth about her grandfather as she tries to help straighten the real and metaphorical mess on her family’s property.

“Go Home” has won international film festival acclaim and will be screened as part of the French Film Festival in Seattle on Oct. 4.