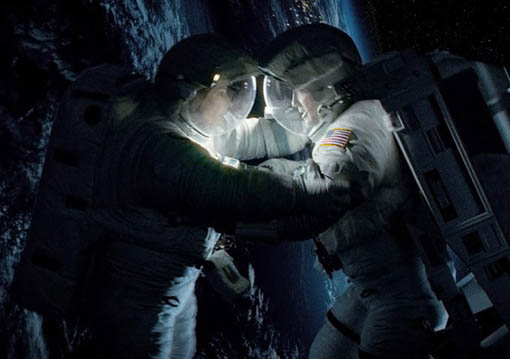 “Gravity” opens with a 20-minute single shot that is just the beginning of what is one of the most beautiful, majestic and moving films I have ever seen.

This behemoth of a project has been a passion project of writer-director Alfonso Cuarón’s for years and I’m happy to say that “Gravity” is a glorious achievement in filmmaking – it is straight-forward entertainment that gives you the maximum value on the screen.

The movie features Dr. Ryan Stone (Sandra Bullock) as a novice astronaut who is on her very first journey into space along with veteran and retiring astronaut Matt Kowalsky (George Clooney). They are installing new equipment aboard the Hubble Space Telescope when a barrage of debris comes crashing into them, destroying their shuttle and sending Stone flying into space.

Kowalsky must use the last of his booster fuel to get to her and get them to the nearby I.S.S. (International Space Station) and make their way to a rescue pod to get them back to Earth before the debris makes the orbit around Earth and returns to finish them off.

It’s not only a race against the returning debris, but their extremely low oxygen as well. This will take all their will-power and determination to survive if they hope to ever step foot on Earth again.

“Gravity” is a man versus nature story — a survivalist thriller in space that isn’t just one of the best looking films of the year, but an awe-inspiring accomplishment in a special effect era that will blow your mind as well as touch your soul.

Sandra Bullock and George Clooney are compelling as these two very different astronauts, but mesh together phenomenally and bring heart as well as laughs to even the direst of circumstances. Bullock, who is the stand-out star of “Gravity,” will inspire you to care and root for her. Her multi-dimensional performance is layered with trauma, fear and hope. 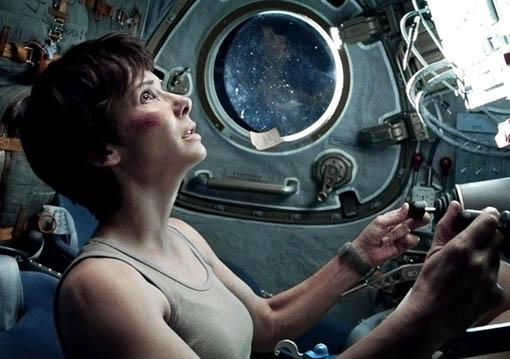 However, the movie’s true star is the effects and the spell-binding way the camera floats seemingly un-tethered, giving us the most unique and real feel to any space film ever created. Cuarón has been working on “Gravity” for the past four years, even helping to invent and develop a new system for the cameras with cinematographer Emmanuel Lubezki to give the right look and feel to the film.

The use of visuals, the dimensions of space, the lack of sound aside from what we hear inside the space adventurers’ helmets, and a very subtle but powerful score from Steven Price helps enhance the thrills as well as the more somber moments. “Gravity” could have easily fallen into the been-there, done-that category, but the director’s unique vision, lack of dwelling on the clichés, amazing visuals and a sleek running time of 90 minutes combine to keep the film on pace and the urgency of the characters’ situation always fresh in our minds.

This film must be seen in 3D to get the full response to the vastness of space along with the amazing effects of flying debris and exploding space equipment in proximity to our heroes. Also, you need to see the movie on the biggest screen you possibly can, ideally in IMAX as it fills every millimeter of that giant screen and easily earns the small upgrade fee it will be to see it in the best format possible.

While “Prisoners” was one of the most intense films I have seen this year, “Gravity” has easily taken the spot for best visuals and most and ground-breaking films of this year. While the story might be simple, the performance, visuals and technology used to make it are obviously anything but.

I can easily see “Gravity” getting nominated in multiple categories at this year’s awards shows and deservingly so — this is a movie that must be seen in theaters and you will be glad that you did. An intimate look at an event with a massive scope in space, “Gravity” is a wondrous work of art that will become the gold standard for movies in the future, a masterpiece that is easily Alfonso Cuarón’s best work yet.

“Gravity” is a film that you can and should take nearly the entire family to see. This is the closest thing to space travel you could possible ever wish for without becoming an astronaut yourself. 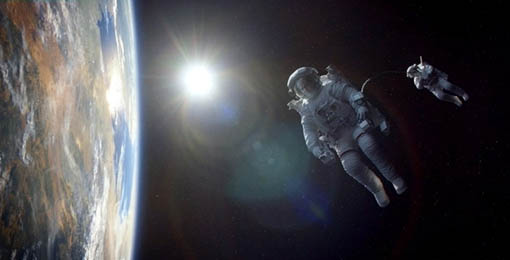 “Gravity” orbits theaters Oct. 4. It is rated PG-13 for intense perilous sequences, some disturbing images and a brief strong language.