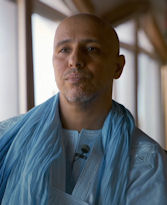 This review is the second in a three-part examination of films dealing with the Guantanamo prison situation.

Released from Guantanamo Bay detention camp in 2015 for lack of evidence and a negative polygraph after 14 years of imprisonment and torture by the US government, Mohamedou Ould Slahi was returned to his home country of Mauritania. There he made a fascinating request. He would like to invite his persecutors, those who tortured and humiliated him at Guantanamo, to his home for tea and forgiveness.

The diary referenced in the film’s title was the record Slahi wrote during his detention and upon which the film “The Mauritanian” is based. The revisit is what happened after he was freed. He asked John Goetz, an award-winning American investigative journalist living in Berlin, to help him find and invite his past jailers to his home in Mauritania.

Goetz’s Challenge
Goetz may have thought that Slahi’s tea party might not end well. The guests would be in a strange country without US protection confronting a man, now presumed innocent, whom they had harmed and humiliated. Who would accept such an invitation? And for those that did, what could go wrong?

In the beginning, the biggest problem was locating the Guantanamo military personnel associated with Slahi’s incarceration. Most of their tours of duty had ended. Goetz initially mused, “It’s not going to be easy to find these people. Their identities are protected by the US government. Should I try?”

But Goetz’s persevering investigative skills and curiosity proved up to the challenge. He filmed each jailer’s reaction to Slahi’s invitation, resulting in a more revealing documentary than anyone ever anticipated.

Renewed Pressure to Close Guantanamo
By 2006 up to 500 prisoners had been detained without charge, significant evidence or legal representation at Guantanamo.

For 11 years, beginning in 2005, Nancy Hollander represented Slahi’s case pro bono. In 2015, while still imprisoned, Mohamedou’s diary of events, the first and only memoir by a still-imprisoned Guantánamo detainee, was published by Canongate in the UK and Little, Brown in the US.

Slahi’s notoriety from this best-selling memoir, “Guantanamo Diary,” and the success of the 2021 movie, “The Mauritanian,” starring Jodie Foster as Nancy Hollander, added to the pressure, now on the Biden administration, to close the US base. “Guantanamo Diary Revisited,” keeps the issue alive for the remaining thirty-nine detainees who now remain indefinitely without charges or representation.

“Close Guantanamo Now”
In 2016, Slahi was released because Hollander showed there was no evidence against him. In addition, he passed a polygraph test. No apology or compensation was proffered by the US for the 14 years of de-humanizing treatment and illegal incarceration.

“Guantanamo Diary Revisited” premiered at the “Close Guantanamo Now” vigil on Jan. 11, 2022. Afterwards Slahi, Goetz and former US Marine Prosecutor, Stuart Couch, verified the honesty of the film and urged for the closure of Guantanamo. They also advocated for relocating the remaining 39 prisoners, 28 incarcerated without charges, into the US for federal trials.

“Guantanamo Diary Revisited” opens March 29 on VOD and DVD. It is a documentary of uncommon depth that compels deep thought about American decision-making both in the military and at the highest levels of US government. 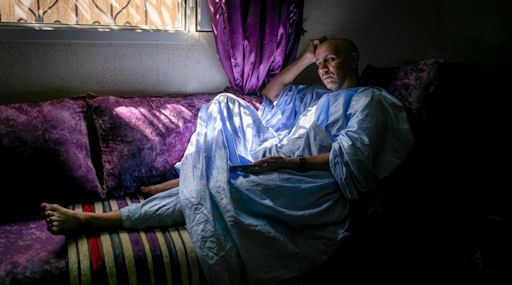