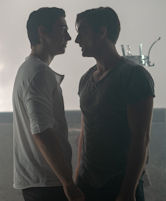 Shakespeare’s “Hamlet” (circa 1600) is the most performed of all Shakespeare’s plays but mysteries and scholarly debates swirl around it. One of the reasons is because Shakespeare’s plays do not include the action occurring on the stage, only the words. This version, titled “Hamlet/Horatio,” is a retelling of the plot from the perspective of Horatio, Hamlet’s best friend.

Some of the murky questions about Hamlet as a character deal with gender identification, love, sanity and allegiance. Was Hamlet bisexual? Did he love Horatio? Did he have sex with Ophelia? Did he have lust for his mother? When was he mad and when was he sane? And finally, did he nobly forsake all his human love interests to bring justice to Denmark, or was this just by accident?

Horatio’s perspective on events is perhaps inventive, but we cannot say they didn’t happen, especially since Paul Warner, director, and David Vando, writer, aptly connect them with the dialogue. In addition, since the dramatization is outstanding by the entire cast, the viewer is truly influenced to consider the new possibilities.

Was Horatio (Themo Melikidze) present at the “To be or not to be” speech? Did Hamlet (Andrew Burdett), in his despair, debating all the outcomes of his father’s ghost’s command to avenge his murder, really take up a knife to end his own life? Did Horatio enter and wordlessly grab the dagger from Hamlet? Would that action change how we perceive their relationship?

Sometimes I’m left wondering, “How did Horatio see that?” For example, in a scene between Ophelia, her father Polonius and her brother Laertes, Laertes’ affection towards Ophelia appears to have some incestuous overtones as Polonius hurriedly interrupts Laertes kissing Ophelia. Where was Horatio, hiding behind a rose bush?

Also, there is an additional romantic scene between Hamlet and Ophelia enmeshed in a secret covey of bushes. How did Horatio witness this? Was he a stalker?

And what about Ophelia? My only disappointment is that Warner and Vando had the opportunity here to re-make Ophelia from a willow-wisp, neither shunnng her brother’s advances or Hamlet’s, to having a more defined, wary mind. Instead, she seems even more brain-dead, over-emotional, and naive of the deceit all around her. Is the original dialogue so pointedly narrow that there was no room for a change of action for her?

“Hamlet/Horatio” has been a 20-year collaboration between Warner and Vando. Their production makes us think and inspires us to question what we assumed about Hamlet, not only from the goings-on in “Hamlet,” but in what all Shakespeare’s plays famously reflect, our own roles in the world: “All the world’s a stage, and all the men and women merely players: they have their exits and their entrances; and one man in his time plays many parts, his acts being seven ages (Shakespeare’s “As You Like It”).


“Hamlet/Horatio,” an incredibly well-presented and important addition to understanding “Hamlet,” premiered June 1 and is available on Cable VOD and Digital HD.