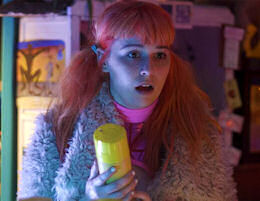 Taking drag queen art to the next level, writer/director/lead actress Molly Hewitt crafts a Glam mash-up with a cast of Olympian weirdness. This is not a movie that brooks intense analysis, rather it invites submersion in the Glamtastic. Political themes run in and out of the chatter, but the bottom line is mostly “why don’t we just get along.” The snarky jabs at throw-away consumerism are welcome, but hardly news. Almost every product in the film is named “Glam-something.” Like Alice in Wonderland’s pills that makes you larger or smaller, the communication of product details, is, after all, little more than a smokescreen.

Communication is a central theme as Trinity attains the ability to speak with the dead after huffing a particularly spiritual aerosol. It is love at first breath and her quest to identify the unique ingredients of the canned transcendence gives birth to one of the funny vignettes that make up the screenplay. The ingredients are nebulous, as they are in a lot of products. The blessing is what makes the difference, but if a blessing is canned, is it still a blessing?

Consensual sex, a major concern of the sex-positive, is given good screen time. There is a huge difference between taboo sex and forced sex and, although obvious to some people, this needs to be stressed to others. One problem is those who need the message are as likely to watch this movie as to fellate an ostrich. The other problem is more esoteric; is it possible for a dead person to give consent?

This is where Trinity’s new-found abilities can be put to use. Concentration leads to success, but as in the fable of the Sorcerer’s Apprentice, too much of a good thing ensues. Knowing how to turn the voices on is one thing, turning them off quite another. A problem similar to huffing blessings, no doubt; once one gets started, it is hard to stop.

This dilemma leads to a Glam version of Dorothy’s trek to see the Wizard of Oz. Priests, witches, drag queens, Reiki masseuses, Tarot psychics, Brazilian psychics, crocodile psychics (parents, you might want to leave the kids at home for this one) and others weigh in. Mis-en-scene runs the gamut from large to gigantic to mountainous. The costumes are a homage to every Glam excess ever conceived and the cinematography is millennium Oz. Like consumerism, if big is good, and bigger is better, then just right is eyelashes like the Cedars of Lebanon.