Review: The Art of Self Defense 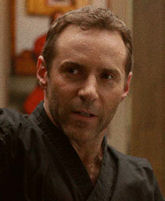 There is nothing finer than a well-executed flick about going insane. The film medium is well suited to depicting the human psyche walking the fine line between rationality and lunacy. Jesse Eisenberg is developing a niche in this genre. As the protagonist who flies too high in “The Hummingbird Project” or, in this movie, the born-again-hard nebbish wobbling between realities, he is turning out to be very good at it.

From the beginning, we know that there is more to the art of self-defense than meets the eye. The use of “art” as opposed to craft or practice tells us there is going to be a psychological aspect to this ditty. We are not disappointed. As we expected, Casey’s journey to self-reliance and blessed security will have more to do with his mental state than his physical ability to break a board with his bare hands.

Eisenberg is an old pro compared to writer director Riley Stearns. In this, Stearns’ second feature, he reaches for the brass ring and almost pulls it off. After Casey’s initial brutal beating in an intentionally set-like slum the screenplay gradually ups the tension with some nice twists and turns but fails to develop those most important elements — the supporting roles. Imogen Poots and Alessandro Nivola play star student Anna and fight master Sensei. Nivola is able to flex his chops a little, snaking subtle undercurrents of snarkiness and sketchiness through the rough and tumble world of professional martial arts. Poots is simply not there.

The much-respected civilities of Eastern fighting are, in some cases, only a stone’s throw away from professional wrestling. Stearns has a good time with the trappings of commercialized martial arts. The colored belts are such a target of snark-loaded vignettes it must have been impossible for him to keep a straight face at the typewriter. Especially when Casey presents his master/teacher with the ultimate honorific—a hand-made, suitable for dress wear, black leather belt. Oscar nomination for both Jesse and Alessandro for not breaking down hysterically in severely lame circumstances.

As the droll contrast between the old and new Casey gives way to darkness, the fun begins. Casey is born-again hard, but with nice flashes of master Vincent D’Onofrio in “Full Metal Jacket.” The first impression is that he is being driven insane by the brutal demands of enacting his fight fantasies. Next comes the possibility that he is sane and those around him are insane. Then, finally, the real story. Then the final, real, real story.

Davey Johnson almost steals the show as the gun store owner who out-nebbishes Casey. Doing his due diligence by reciting the routine risks of owning a gun, which appear encyclopedic, he dwells in that anarchic dream world of a capitalist trying unsuccessfully to put himself out of business. Similar kudos for David Zellner playing the student who makes the major mistake of retaining his sanity when those around him are losing theirs. Be there or be weak. 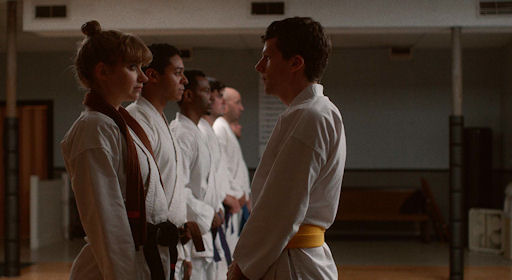