Review: I Do Not Care If We Go Down in History as Barbarians

This delicious treatment of the art, craft or debacle of making a movie places the dilemmas of the commercial artist alongside the travesty of the Holocaust. The treatment of the concept as a movie within a movie comes through as simply superlative film making. It is a joy to behold, even when the two-hour plus extravaganza winds into extended philosophical dialogs. The arguments are valid enough, but it is the sly humor finding its way into the deadly serious subject matter that makes the film great.

The initial reaction to the publicity suggests a documentary of the Romanian and Ukrainian complicity in the murder of thousands of Jews during WWII. Drilling down several layers below that, it is a treatise, or a dialog, into the difficulty of accepting undesirable truth. The truth itself is bad enough, but even in the face of overwhelming evidence, it seems inevitable that the pretense of acceptance will seep in to displace real understanding.

Ioana Iacob plays director Mariana with panache. Beautifully contradicted by her own immoral, adulterous relationship with a perfectly feckless married-with-kids airline pilot, she becomes obsessed with revealing the truth of the Romanian Holocaust. The pitch-perfect screenplay by writer/director Radu Jude ratchets up the tension in her standoff with producer Movila (Alexandru Dabija) as she becomes ever more strident in defense of a brutal exposition. As this deepens and intensifies, she finds herself mired in her doomed romance, perhaps hoping her historical mission will redeem her own failed morality.

The director/producer conflict is echoed off the wall of the fictitious movie cast, who themselves are conflicted about exposing their country as a tool of mass murder. They do not seem to question the truth as much as they are ham strung by the fog of war and the blurred nature of wartime documentation.

The movie within a movie becomes a half dozen interwoven plots spotlighting a hugely varied cast of characters, many of whom are unsure of even why they are there. In the final scenes, the deputy mayor of the city comes onto the set to present the filming of the finale. She is so intensely stupid and despicable that her very presence almost explains everything one needs to know about dictatorship, terror and mass murder. She is the present day Marshall Ion Antonescu.

The overall presentation has the constant movement of a Robert Altman film with the dark humor of “Apocalypse Now.” Several extended conversations between Mariana and her lover, and she and the producer, reflect the insanity of war against a mirror of the insanity of life itself. The director moves in and out of reality and obsession constantly probing and flexing the theatre’s fourth wall in a playful, and skillful, dance of cinema.

If you liked Radu Jude’s work in “The Death of Mr. Lazarescu” (assistant director), this is a must see. It takes the dance of death to the final act. 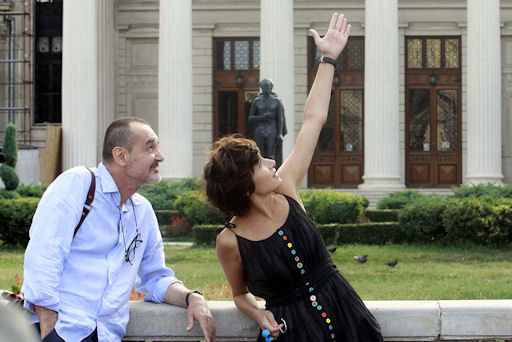