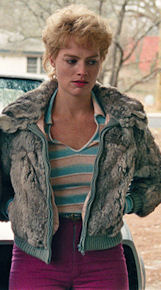 Unbridled ambition to rival Nicole Kidman’s “To Die For,” Tonya Harding’s story may be the dark comedy of the season. The first woman to land a triple axel in competition and one of only eight in the history of the sport, Harding was banned for life from skating competition. Spanning the early years of the champ’s life, and climaxing with her involvement in the assault of rival Nancy Kerrigan, this is a rocket blast of a tale of unvarnished brutality, unspeakable heartbreak and non-stop excitement.

Behind every performer there is a stage mom. Behind Tonya is her rink mom LaVona Golden. Although Margot Robbie gets the screen time, and deserves every bit of it, it is Allison Janney who steals the show. LaVona is a divorced single mom working as a waitress and spending every dime she has on making her daughter a champion. In the course of that, she drives herself even crazier than she was when her daughter was born. This hardscrabble pair feeds off the abuse of others and the nearly uninterrupted battle of wills between each other.

All this and power skating, too.

For those viewers not around when the story hit the papers, look it up on the net before you see this great movie. It embodies everything that makes America great, and disastrous. The gifted champion that nobody sees except her mother and the abusive husband who serves as a lightning rod for Tonya’s fury when she is snubbed by the establishment. The rocket sled ups and downs of international glamor alternating with rick bottom waitressing in a country café.

As the film tells the story, Harding was far ahead of her time. Competition figure skating, like many other sports, is controlled by a professional association. Without the creds to join the association there is no competition, no medals and no fame and fortune, no matter how good the athlete. When Tonya started competing in the 1980’s the rules for female skaters were blunt. They were to look like Walt Disney’s Tinker Bell while on the ice and act like June Cleaver everywhere else.

Tonya Harding’s life was anything but either one. In the rink she dressed like a pole dancer and skated like a hockey player. Off the ice she was dodging knives thrown by her mother and punches thrown by her husband. As they came, she gave back as good as she got. She knew how to ice skate, but she did not know how to play the game. Like most mavericks she missed the brass ring, but she survived and is still surviving to this day.

The movie also features a stand-out supporting performance by Paul Walter Hauser as self-described body guard and international terrorism expert Shawn Eckhardt. Driving sound track of ’70s and ’80s oldies that put rock and roll firmly in the center of everything that was, and is, wrong with the world. If your parents don’t get you, the music will.