Review: If Beale Street Could Talk

Nominated by the Golden Globe for best picture, best screenplay (Barry Jenkins), and best supporting actress (Regina King), “If Beale Street Could Talk” is a masterpiece. Set in Harlem around 1972, it tells of the romance between Tish (KiKi Layne) and Fonny (Stephan James). One evening, while having a friend for dinner, the police enter and take Fonny to the police station to participate in a line-up. Unfortunately, a traumatized Puerto Rican woman identifies him as the man who just raped her moments before. As implausible as this must be for all to see, since Fonny was far away from the crime and having dinner, he is locked up in jail.

The poignant screenplay was written by writer/producer/director Barry Jenkins in just five weeks. He based his story of black life in America on the acclaimed novel by the same name published in 1974 by James Baldwin, known for “I’m Not Your Negro.”

What struck me was the sincere, gentle respect and love Alfonso, aka Fonny, has for his girlfriend and the depiction of how a black family lives in a two-tiered social system. Played with a complexity at once tender and gentle in love and quick to anger in self-defense, Stephan James’ characterization of Fonny is a smoldering response to white society’s attempt to de-masculinize him — to deny him a place to live, a salary on which to sustain a family and a respect to simply shop in a grocery store without insult.

The prejudice between Tish and Fonny’s families lends a Romeo and Juliet tone to the love between Fonny and Tish. Yet, there is also a love and joy within Tish’s family that works to build bridges. Still, wherever the black people go, their happiness is always overshadowed by an inexplicable menacing white threat. Not always the villain, it is an old white shop-keeper who keeps Fonny from being hauled away when he retaliates against a man harassing Tish. The white policeman marks him, and the viewer is led to believe that this first association is what leads Fonny to the fateful line-up.

Regina King’s role as Tish’s mother embodies all that is supportive, loving and powerful in the black family. While the two fathers work some illegal angles to earn extra cash, it is she who uses this money to bravely fly down to Puerto Rico to confront Fonny’s accuser.

Jenkins’ film is a treasure as is Nicholas Britell’s score accompanying it. Together with a great ensemble cast and outstandingly sensitive cinematography, this film will be placed amidst the classics. 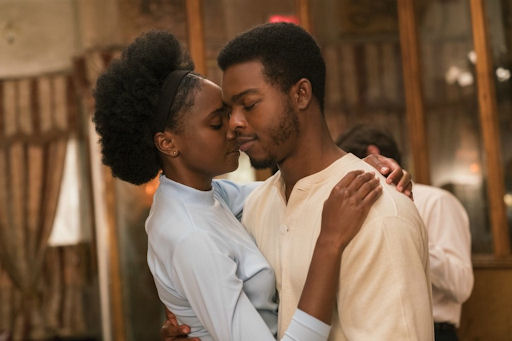