Review: Won’t You Be My Neighbor?

“Won’t you be my neighbor? It’s an invitation for somebody to be close to you. You know, I think everybody longs to be loved and longs to know that he or she is lovable. And consequently, the greatest thing that we can do is to help somebody know that they’re loved and capable of loving” (Fred Rogers, 1928-2003).

Airing from 1968 to the last PBS episodes in 2001, Fred Rogers masterminded his “Mister Rogers’ Neighborhood” children’s show featuring two sets, one with a window and door that was an entry to his stage home and another with a castle and trolley that was a fantasy kingdom. Every episode had a theme of social-educational value geared towards explaining the complicated in a simple, understandable way to little children.

The show had segments on death, bullying, abuse of power, war, and racial acceptance as well as on animal care, values like responsibility and how different machines worked. Rogers was the head writer, composer, producer, host and main personality of the show.

Several times those in the film wondered how Mr. Rogers would deal with current affairs in the nation and the angry split in America. How would he explain all of this so that children (and us) could understand?

The film tackles all the questions one might have about Fred Rogers and his show. He was a different kind of guy, sometimes suspected of being gay. Was he straight? What was his political party? What religion? What did he prepare to be when he grew up? What was his childhood like and was he ever bullied? Did he grow up rich or poor? How did he handle social issues?

There are several events happening this year, including a commemorative US postage stamp with a picture of Mr. Rogers, a PBS special and a biography as well as a film with Tom Hanks and this biodoc, because this is the Golden Anniversary of the first “Mister Rogers’ Neighborhood” tv show.

Fred Rogers has won many awards, including the Presidential Medal of Freedom bestowed by President George W. Bush in 2002, and 40 honorary degrees. This award-winning documentary, with interviews with his wife and two sons along with his TV associates, is a precious reminder of what being a good neighbor means.

At the end of the film, bowing to Rogers’ affinity for silence and reflective thought, Junlei Li, Harvard lecturer in early childhood education, asks “…think about somebody who’s helped you along the way. Let’s just take some time to think of those special people.” Silence ensues for the viewer and shows many of those interviewed in the film thinking of their own special person, most with tears in their eyes. This moment, like the entire film, invokes thoughts about what it means to be a good neighbor in our family, community, nation, and world. 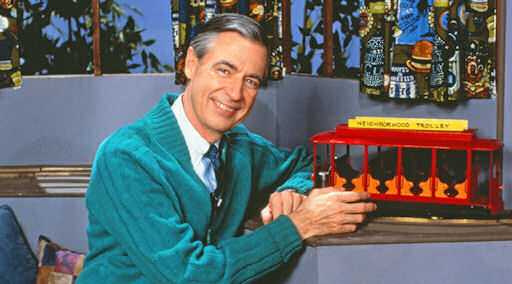