This is the perfect Veteran Day’s film. It is the story of a WWII vet named Frank Moore and his reconciliation with the unspeakable inhumanity he suffered in war interwoven with his passion for a fishing rod, nature and a beautiful wife. 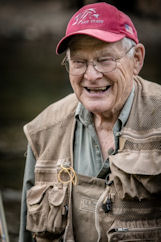 Miraculously, there is a saved letter he wrote from France during the war. Moore reads it out loud 70 years later to his wife, Jeanne, who knows this letter well. It is a love letter. She had responded to it by sending him a picture of herself. He says that when he saw that picture he was determined not to take any more chances so he could make it back to her.

Frank Moore is 90 years old now and he has had a great life. He and his wife founded Steamboat Inn on the North Umpqua River in Oregon, helping make this gorgeous bit of nature a fly fishing mecca. He also ended up becoming a world-famous fly fisherman and an active conservationist, winning many awards.

But back in his mind, having suffered greatly as other WWII infantrymen have from the unspeakable nature of war, Frank kept one small vision in his mind – perhaps to keep his sanity as well as his humanity. After being part of the Normandy invasion, while walking through a simple little French town, he gazed at a lovely old stone bridge over a quiet little river. He wanted to fish that river.

Time passes. Then this documentary is proposed and he is asked what he’d still like to do. He responds he’d like to return to France to see it during peacetime … and also to fish that river.

Through sponsors, Frank, his wife, Jeanne and his son, Frankie, take the trip of a lifetime. They return to Normandy and attend a service at the cemetery above Omaha Beach. There Frank pays tribute to all who did not make it back home. He is in tears.

But it’s the return to the little French village and the river that still rushes through a pastoral countryside that appears to offer him solace and escape from life’s crueler side.

The film is meticulously and brilliantly crafted. At times the gifted filmmaking team, Steve Engman and John Waller, have Frank on Omaha Beach, in a village or on a street where they miraculously transpose him into a picture taken during the war at that same spot – putting Frank dead center in it.

Frank does have a surprise in store for him and his reaction is all we expect.

The film is a tome to life, love and to the power of nature. It is the perfect reminder on Veteran’s Day about the cost so many young people have paid juxtaposed to a tribute to the abundance that life has to offer. 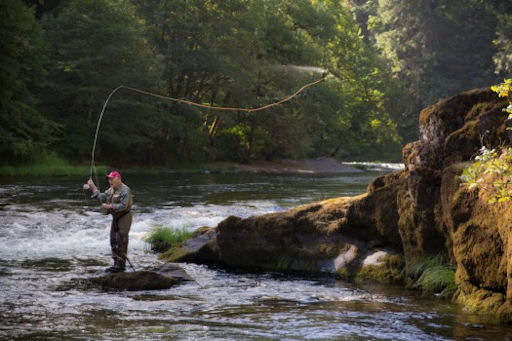 “Mending the Line” plays on Veteran’s Day at
the Northwest Film Center in Portland, Oregon