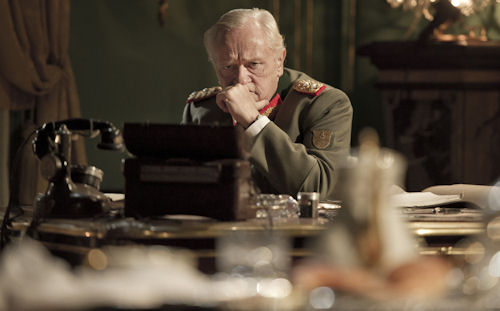 After watching Volker Schlöndorff’s (Oscar-winning German director of “The Tin Drum”) touching, scary and occasionally funny rendition of an imaginary meeting that decided the fate of Paris, you may never watch “My Dinner With Andre” in the same way again.

Meeting in the last hours before the Allies’ WWII liberation of Paris, Swedish consul Raoul Nordling (André Dussollier) and Nazi Général von Choltitz (Niels Arestrup) debate the practicalities, sensibilities, mandates and options of turning the gem of Europe into a pile of burning rubble.

In August of 1944, Hitler had made his orders clear to seasoned war horse and commander of the Nazi forces in Paris General Dietrich von Choltitz. If and when it was inevitable that Allied forces would enter the city, dozens of huge edifices and structures would be demolished. As Berlin was bombed into unrecognizable ashes, so would be the crown of France. If the Nazis could not have Paris, nobody would have Paris.

Tons of explosives were set, wired and ready to be detonated from several control posts. As the film tells the story, a French engineer intimately familiar with the Louvre, the Eiffel Tower, Notre-Dame and other priceless structures, as well as all of the city’s major bridges, had been pressured into designing a man-made hell of explosives that would turn Europe’s largest treasure trove into burning rubble. The destruction of the bridges was designed to block the Seine, causing major flooding up to ten feet deep in large parts of the city. The Nazi military would be free to do as they pleased in the final minutes before the Allies began shelling what was left of the city, killing a large portion of the City of Light’s approximately 1.5 million inhabitants.

Using a secret passageway into the legendary Hotel Meurice, on Rue de Rivoli, and into the room of the battle hardened General von Choltitz, Nordling pops in for a cup of tea to renew an old friendship. In fact, history records the two had a working relationship that had resulted in a life-saving exchange of prisoners shortly before the fateful liberation of Paris. They had a grudging respect for each other; even while their looked at the world from almost polar opposite points of view. It is this difference of perspective, and the incredibly high stakes of this hour long meeting, that director Schlöndorff and playwright Cyril Gely exploit to make this fascinating essay about the plans of mice and men.

As the first half of the film proceeds, Nordling makes appeal after appeal to the human sensibilities of the General. Countering every argument, the general is nonetheless gradually driven into a corner by the clever Nordling. But just when it looks as if the General must relent and call in the last minute order to cancel the decimation, von Choltitz reveals the real stakes upon which his decision is based. The law of Sippenhaft, derived from Germanic law of the middle ages, has been thoroughly reinstated by Hitler and makes the General’s choice far dearer than Nordling first imagined. In the final twenty four hours before the US 2nd Armored Division enters Paris, Hitler personally orders Choltitz to raze the city.

As the end draws near, soldiers call in from the field amidst the roar of artillery explosions and the breaking asunder of concrete fortifications. There is still time to destroy the city before the French Resistance troops cut the lines and begin the destruction of the Nazi troops left behind. But there are no orders to give. The lights flicker and go out in the claustrophobic confines of the hotel room. Phone lines are broken and remade, conversations break down. There is no best solution; all that is left is desperation, sacrifice and a trust with no foundation other than simple human decency, which the General has sworn to leave behind.

Even if the film is more fiction than literal truth, the emotion is as real as it gets. Paris becomes the lover betrayed by mankind. In the final moments of the film the perspective lifts out of the hotel room and onto the rooftop, where the city bares itself to the seemingly imminent debasement of war. As the camera pans across the landscape that most of the Western world has learned about since grade school were are really wondering if it will be saved or demolished. A film that dares the viewer to understand how close we came to losing one of the world’s greatest cities.