Executive produced by Will and Jada Pinkett Smith, “Sprinter” is an exhilarating inspirational story of immigration conflicts, family, perseverance and love.

Akeem Sharp (played by Dale Elliott) lives with his father and brother in Jamaica. He achieves somewhat reluctant notoriety as a high school sprinter and is eventually called the next Usain Bolt. While he strives to be just a fun-loving regular guy, a coach sees potential.

But Akeem has conflicting energies. Ten years ago, Akeem’s parents were ambitious but near destitute. At that time, they had agreed that the mother would go to America to work and send back money. In a few years, they thought they would have enough money to reunite. But complications occur. Now, Akeem has been waiting ten years.

Eventually, behind his sprinting success is the knowledge that the high school track and field champions will go to America to compete. This means Akeem may have the chance to see his mother again.

Akeem’s high school coach tells him to “figure out where you want to go and focus on that and nothing else. Mental blinkers.” It’s these last two words that remind Akeem to keep his eyes on his goal – rather than all the other distractions high school can bring. However, he ends up falling for another runner. His attempts at being a boyfriend are awkward and reveal his inner yearning to be loved and accepted.

The director/writer, Storm Saulter, a filmmaker and visual artist from Negril, Jamaica, notes on his official website that he is “on a mission to create universal stories wrapped in the complex social and cultural dynamics of the Caribbean.” He has succeeded with “Sprinter.”

Dale Elliott, playing Akeem, has a life not too far from his character’s. At an early age, his parents split, one moving to England and the other to America, while he stayed in school and competed in track and field events in Jamaica. When in the US to do some scenes in this movie, he was able to meet with his father for the first time since he was a toddler.

There is a naturalness about the acting and a sensitivity to the choice so many are forced to make – staying illegally in the US to send money back home or returning to an economically depressed country with the risks that desperation promotes.

Will and Jada Pinkett Smith’s backing for this film is a seal of excellence. “Sprinter” has won Best Feature Film, Best Director, and the Audience Award at 2018’s American Black Film Festival and Best Narrative Feature at the 2019 Pan African Film Festival. It will open theatrically and on-demand nationwide April 24. 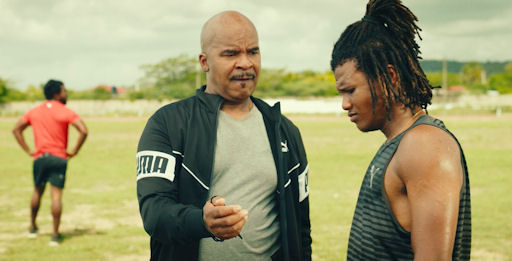