Imagine living as a stray dog in colorful Istanbul where dogs are treated even better than the sacred cows of India. Food scraps are thrown your way and people pet you as you trot by. The only trouble comes from your own kind.

Mixed with sage quotes from the Greeks, “Stray” is a cinematographic feat where it oftentimes appears we are trotting alongside a tail-wagging dog with happy abandon through Turkey’s side- streets with the imposing Haggis Sophia in the background.

Zeytin is the gorgeous, kind, stray dog that Elizabeth Lo, the inspired filmmaker, follows. Named by the street kids, Zeytin is free to roam Istanbul and Lo miraculously manages to keep up using a camera with stabilizer and bi-directional microphone. At night she affixes a pet-tracking GPS collar on the dog in order to re-locate her in the morning.

Is freedom just another word for nothing left to lose?

Turkish law forbids the rounding up or killing of stray dogs, though authorities may capture, tag, fix and release in order to curb the growing population.

Lo juxtaposes Zeytin’s free-roaming life to other street beings, the homeless street children and unemployed immigrants. Where they have restrictions of place and travel, Zeytin has complete, unobstructed freedom.

While Zeytin is allowed to curl up in abandoned buildings and construction sites, the homeless children, her daylight companions, are shoo’d away. Certain garbage collectors, restaurants, and stray animal sympathizers throw out bones and scraps for her to savor while hungry human beings are scrambling to sell scrap for pennies in order to survive.

Where does Zeytin go each day?
There is pleasure as well as danger. Lo follows Zeytin wherever she investigates. Sometimes she hangs out with the street kids and sometimes she plays tag and wrestles with her dog friends. Sometimes, to great tail-wagging delight, she finds a cat to chase.

At night, she may camp out with her street kid friends. They sleep huddled together for warmth in an abandoned ruin, hiding from an official or guard who cannot allow the humans to rest there.

But at other times, as Zeytin innocently walks down a neighborhood street, a pack of dogs rush at her and attack. Even her best friend, another gold dog of similar size, may turn on her over a bone.

Who is better off?
Lo, born and raised in Hong Kong and educated at both Stanford and the Tisch School in NYC, has described herself as a “filmmaker who is interested in finding new, aesthetic ways of exploring the boundaries between species, class, and unequal states of personhood.”

Her juxtapositions, not only to the homeless and unemployed, but to the indulged, groomed and sometimes dressed pets who are walked by their owners, give us pause.

Old construction sites, abandoned ruins, and other areas where street kids and homeless are threatened and driven away are havens for Zeytin. No one cares where she chooses to sleep, unlike the homeless, who are routinely booted out of the most humble of shelters.

“Human beings live artificially and hypocritically and would do well to study the dog.”
— Diogenes of Sinope, 360 B.C.

The bottom line
In the end, Elizabeth Lo has created a thoughtful documentary, not just about the life of a stray dog in Turkey, but about how the world treats its refugees, its homeless, and its poor and powerless. The film gets an A+. 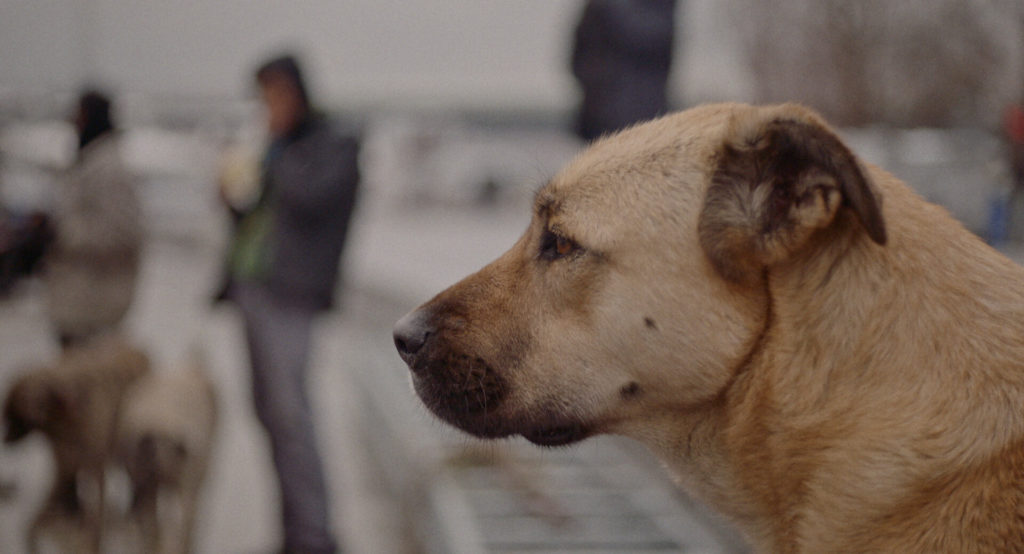