Following on the heels of several years of revelations of sex abuse by coaches and officials in world elite sports this movie puts the facts and figures in a powerful personal perspective. The setting is World Cup skiing and the emotions, betrayals and usuary are universal. They could apply to any vulnerable person anywhere, especially where young and ambitious athletes are forced to comply without recourse to the demands of older adults. The result is never pretty and films like this strike to the core of the problem and the damage caused.

Presented at UniFrance and Film at Lincoln Center’s 26th edition of Rendez-Vous with French Cinema running March 4 to 14 in the FLC Virtual Cinema, emerging actress Noee Abita handles the heavy lifting as prodigal skier Liz Lopez. Everybody wants something in this no-holds-barred cautionary tale of unchecked ambition and unfulfilled dreams, and everybody wants it from Liz.

Coach Fred (played to sleazy perfection by triple Cesar nominated Jeremie Renier) did not make the grade in world class downhill skiing. Maybe it was the injuries or maybe it was a failure of his discipline and his spirit. Now he is the evil flip side of that strong, hopeful youth. He is the authority figure that pulls the strings to make potential champions bend to his will. Given the publicity focused on disgraced sports doctor Larry Nasser there will be few people watching this film who will not immediately see where things are headed when Liz’ divorced and depressed mother drops her off at the nearly incommunicado training camp.

Writer/director Charlene Favier (written in collaboration with Antoine Lacomblez and Marie Talon) saturates the context with natural shots of massive frozen mountains and the machinery that maintains downhill ski resorts. The mountains are as impassive as they are non-judgmental. Nature punishes without drama, making a mockery of the superficial words of the humans on their slopes. Even so sometimes it is hard to tell the bone chilling snow and ice from the darkness of people’s souls.

Cinematographer Yann Maritaud films high angle shots looking at the paths of graceful skiers juxtaposed with the clanking chair lifts. Not only is the noise in stark contrast with the silent skiing, the angles of the cables and tracks etch sharp acute angles onto the screen. Things are not right here and young skier Lyz is going to challenged to live up to her moral discipline as well as her physical ability.

Unconditional power corrupts unconditionally. In the sports world this cycle of despair starts with parents dreaming of fame they never had. Through their children they, too, can be the champions they never were. Coaches and trainers have somehow gained the power of isolating their young charges, supposedly part of a total training program. Parents must stop ceding responsibility to others in raising their children and stop living lives as vicarious champions at the expense of the next generation.

Look forward to seeing Noee Abita and director Charlene Favier in future works of even more creativity and dimension. 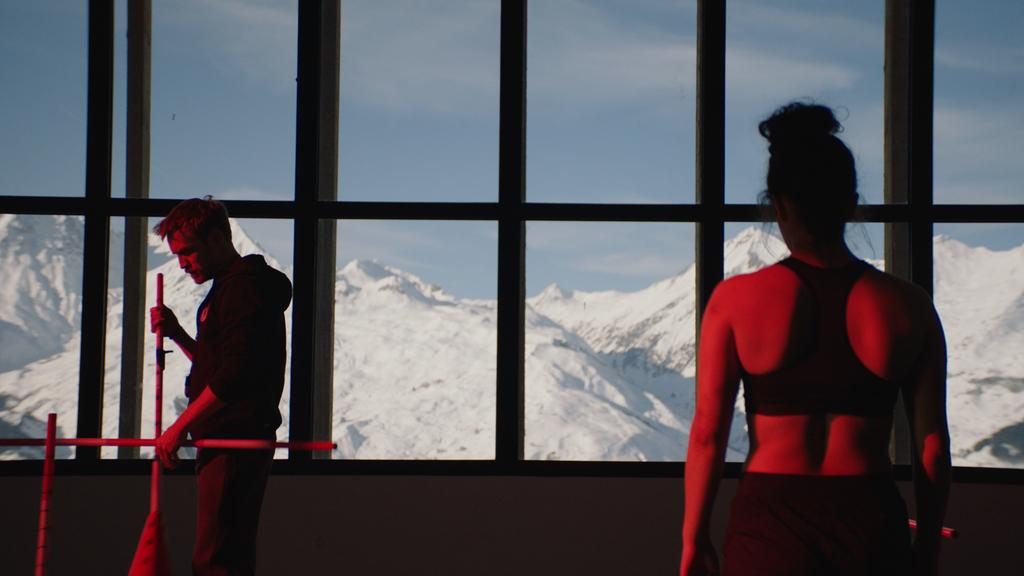