Review: The Girl in the Fog 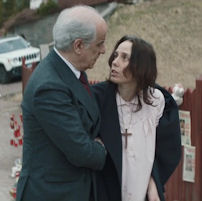 A girl leaves her silent house in a silent neighborhood saturated in fog. She leaves for a religion class, but she never arrives there. She has disappeared without a trace, leaving nothing behind her but the wet miasma. Fog outside, fog inside, fog in dreams and fog in memories. Whoever supplied the fog machines for this flick made a fortune.

A derivative venture by first time writer/director Donato Carrisi follows the rules and churns out an acceptable murder-thriller. The film throws off the Euro/Italian conventions in favor of an Americanized serial killer story. The twists and turns are there but the initial setup seems rushed, as if the viewer is supposed to know some back story. Perhaps this is the mark of a director who is not completely comfortable with the flow and tone of the screen murder mystery.

Toni Servillo gets most of the screen time as agent Vogel, an outside senior detective brought in to run the investigation. As expected, the local police resent him, especially given his checkered history. He is a grandstander and the first half of the movie wobbles back and forth between crime media satire and “Columbo” dumb as a fox crime solving. This wobbling saps the power of the screenplay as the audience tries to figure out what Vogel is up to, if anything.

Alessio Boni plays Professor Loris Martini, another Columbo setup; the smart guy who may be too smart for his own good. He has money problems and weighty baggage of his own, having moved his resentful wife and cranky teenage daughter to a new town. His paltry salary barely puts food on the table, which turns out fine since most meals are arguments and no one eats, anyway. This is a key role in the screenplay, but we are not convinced what all the fuss is about.

Jean Reno has brief, but important, screen time as the shrink Augusto Flores, who counsels agent Vogel through his crime solving trauma.

The parts and pieces are there, but the result is off-balance and lacks momentum. Rather than slowly divulging the information required for the viewer to solve the crime, the screenplay delivers a vague trail followed by complete disclosure in the last few minutes. As there is fog everywhere, there is fog in the screenplay and directing. The multiple twists are expected rather than startling.

Toni Servillo is able to bring his creepy “Gomorrah” street creds to his role as the sketchy but wise super-cop. He is a master at providing half of the information through his lines and half through what we think is going on in his head. Jean Reno is great, so good that he should have had more screen time. Too bad the focus in this movie was not to be on him. He almost steals the show anyway.

Filmmaker Donato Carrisi has what it takes to spin a good yarn, but his plots must get more creative as he will, no doubt, turn out some future blockbusters.