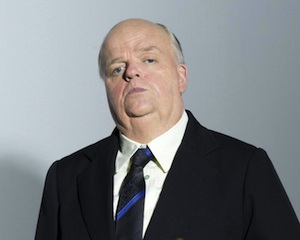 They say you should never meet your heroes. After having been a teaching assistant in a couple of Hitchcock classes, I feel like he was a hero of sorts. The Birds

was one of the scariest films I had seen as a child but I admit that I was more enamored of Hitchcockian humor than of his skill at frightening the crap out of me. Plus my dad wrote short stories for Alfred Hitchcock magazine in the late ’50s and early ’60s, so I felt like part of the family. That is, until I saw The Girl.

The made for HBO film shows a side of the man that I wish I had never seen, but am glad I did.

) is good as the director of our nightmares, although I thought the voice wasn’t quite right. However, he is incredibly creepy as he shows us the darker side of Hitchcock’s character as it stretches beyond the films. He is ruthless and cruel in his treatment of Tippi Hedren (Sienna Miller) and tortures her both physically and psychologically because she refused his sexual advances.

Miller is an interesting choice for the Hedren character but doesn’t look enough like her, nor does she have the more mature facial expressions to carry it off. Instead, she sounds a little like Tippi Hedren trying to be Satine (Nicole Kidman’s character in Moulin Rouge.) However, beyond the casting, the film is fascinating in a watching-a train-wreck way.

When Hedren asks Hitchcock why her character in The Birds

goes up into the attic alone, he answers, “Because I want her to.” When I saw this line in the trailer, it seemed funny, but upon watching the film, we learn that it isn’t the character he wants to torture, but Hedren, making his declaration much more sinister. For the attic scene, he insisted on real birds although mechanical birds had been used in other shots. He didn’t tell Hedren prior to the filming and he made her repeat the scene many times over the course of the day, until he was told by a doctor that she needed rest unless he was “trying to kill her.”

Hedren and her family and friends were invited to a special showing of the film prior to the HBO debut, after which there was stunned silence. Hitchcock destroyed any possibility of Hedren having a film career following the filming of The Birds

. And yet, over the years she said nothing. Internet chatter among Hitchcock fans is furious, hateful, calling the film “a character assassination” which doesn’t allow us to hear “his side of the story.” However, I might remind these fans that no one is a perfect human being and everyone has a dark side about something. Hedren was Hitchcock’s. But more importantly, during his lifetime, Hedren was not allowed to speak up about his treatment of her because of his power in Hollywood. So until now, no one has heard her side of the story.

The film is melodramatic, to be sure, but it would be difficult to take the material in Donald Spoto’s book Spellbound by Beauty

, and not give in to a little melodrama. It also seems suited to the times in which the film takes place. I was more put off by Hitchcock’s wife Alma, played by the amazing Imelda Stanton, who at times is the picture of a long-suffering wife and at times seems oddly complicit in her husband’s pursuit of the beautiful young actress.

Whether you believe Spoto’s thorough research into this period in Hitchcock’s life or not, the film is worth seeing. Once you’ve been given a glimpse under the armor of cinematic perfection that surrounds Hitchcock, it makes him more human but it also makes us more realistic viewers. In a climate of “reality television” It’s good to have our definitions of reality tested once in a while.