Review: The Legend of Molly Johnson 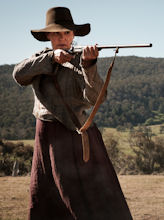 Leah Purcell provides a gut punch that is hard to forget. Though her story takes place in Australia’s outback in 1893, what happens to her protagonist – strong, self-sufficient Molly Johnson – has been repeated throughout geography and time. How much of this story is legend, based on a short story by Henry Lawson, and/or autobiographical as re-written by Purcell, is a secret. What is certain is that the story of Molly Johnson will stop you in your tracks.

“The Legend of Molly Johnson” begins out in the arid Australian outback where Molly is sweeping the dirtway to her shack. No matter how often and swiftly she sweeps, her broom cannot bring clean the dirt that’s there. But she is obviously trying to make things right for her four children and the next obviously on the way.

Molly’s husband is a drover. That’s a guy who drives hundreds of sheep to market. He has been gone for three months. We don’t know how she survives in this shack house with no farm crop or livestock. One day she sees a bull wander onto her property. She shoots it between the eyes. Now she has food to feed her family.

Soon Sergeant Nate Klintoff and his wife Louisa appear driving their wagon up to her property. They have been lured by the smell of her roasted beef. They have been traveling for some time and are on their way to town. Klintoff is the new governing administrator sent from London to bring some civility to the outback.

And that is at the core of “The Legend of Molly Johnson.” Civility. She is living in a time and space where it is sorely lacking amidst the grab for what can be got – including women. Ironically, Molly might be able to handle the crude incivility she endures, but when Sergeant Nate Klintoff and his wife Louisa take charge with the best of intentions, heaven and hell change places.

There are inexplicables about which I have written the publicist. Why does Molly send her four beloved children away? What is the full story on what happens during her last childbirth? Why does the new constable’s wife appear sick at first but then suddenly fully recovered during Molly’s great travail?

So, while watching I was frustrated, until the film starts winding down to the end. Then I am struck. Like that punch to the gut, I know I am watching truly great filmmaking. There are unanswered questions and there are quizzical deviations. But there are also profound metaphors in the location, action, dialogue and interplay of colonialism justice.

Leah Purcell, an Aboriginal Australian, is the director, writer and star. “The Legend of Molly Johnson” represents the focus of her life’s work since 2014. She has succeeded in both powerful filmmaking and powerful acting.