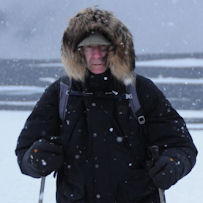 Ranulph Fiennes, who goes by Ran, is in the Guinness Book of Records Hall of Fame as the greatest living explorer. At the age of 65, he is the oldest to summit Mount Everest and the only person to circumnavigate the globe, crossing both poles within three years. Asked why he does it, he answered, “I’ve been doing it not because it’s romantic, but to pay the gas bill.”

Down-to-earth, under-stated, slim and hardy, Fiennes is known as a man who pushes the boundaries of what humans can do and understand. Cutting off his own frostbitten fingertips with an electric fretsaw pretty much defines his no-nonsense practical instincts.

“Explorer” is beautifully presented using selections of archival footage, masterfully edited by Charlie Hawryliw and Ben Stark. There are home movies of Ranulph playing with his best friend, capturing his early excursions into risk-taking. By 12, he met Ginny who would eventually become his wife and most ardent supporter. It was Ginny who encouraged him in the circumnavigation of the globe and it was Ginny who planned it.

There is footage of him as a soldier in Oman. He reveals the one thing he taught his Omani soldiers that allowed them to survive and made them a little famous. There is also footage of him trying out for the original role of James Bond, an idea Ginny thought would help him earn some money for his expeditions.

The greatest thing about Ranulph Fiennes is that he has raised more than 19 million pounds ($22,324,031 USD) for charities. His first official charity expedition was his 1992 Antarctic journey with Dr Michael Stroud, which raised £4.2 million for the Multiple Sclerosis Society. In 2003, he helped raise £2.3 million for British Heart Foundation by running seven marathons on seven continents in seven days just four months after double coronary artery bypass surgery.

There is chilling footage of Fiennes pulling a 40-pound sledge across the desolate, breaking ice of Antarctica, walking carefully on a ladder laid over a gaping crevice on the way to summit Everest and a sentimental clip of him rushing, all parka’d up, into the arms of Ginny, so happy to be alive and reunited after a death-defying expedition. These shots and others define the driven man. Cousin to actors Joseph and Ralph Fiennes, Ranulph only met them rather recently, as while they were growing up Ran was missing greater family events because he was off on expeditions.

What hits me most strongly is Ran’s drive to live and live fully. He is on a hero’s journey, as we all are, but his is intense and his spirit is driven.

“Explorer,” an inspiring film about following your passion while doing good became available on digital and on demand Aug. 30, 2022.