Review: We Are Gathered Here Today 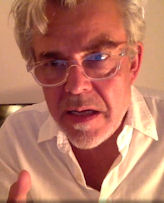 Henry Stone is a tough man. Everyone says he is as strong as a bull. But two days ago he was admitted to St. Maria’s Hospital with severe COVID-19. Today he is dying, and his family is gathering via Google Meet to say their farewells.

The above few sentences are the backstory and premise for “We Are Gathered Here Today.”

Writer/director Paul Boyd has set a daunting task for himself. Not only has he written an emotional roller coaster of a story depicting the anguish of too many families that were unable to say goodbye to a loved one, as that person dies alone, intubated and sedated, in a sterile hospital room, but he chose to film the entire thing as a video meeting including all the digital/physical limitations of that medium.

For those of you already saturated with the difficulties of using Zoom, Google Meet, Skype and others, this may sound like an invitation to torture rather than entertainment, and I felt that way as the film began.

Peter Stone (Danny Huston – “Fade to Black”), Henry’s son, is first contacted by Henry’s doctor (DaJuan Johnson – “Bosch”) who tells him, via video conferencing, that Henry’s body is shutting down, death is imminent, and that the family should gather. Peter is first shocked, than outraged, and finally accepting of the fact that the family will not be able to gather at the bedside, but rather at their individual digital screens.

From there the calls go out.

If you have ever seen movies based on gatherings of family members (weddings, funerals, holidays, etc.) you know there will be tensions and old hurts and disagreements will surface. It is the nature of these stories because it is the nature of humanity. It happens here as well. Director Boyd has wrought such fine performances and has written such strong, realistic dialogue, that the encumbering conference technique soon fades into the background.

This is an excellent film that serves to remind us of the pain millions went through in this country alone, as patriarchs and matriarchs, husbands and wives, even young children were lost to their families, not by a beloved hand growing cold, but by an electronic image shut off.

And those were the fortunate ones.

At the end, as the credits roll, we see a somber Boy George singing the title song “We are Gathered Here Today.”