Review: The Lucky One 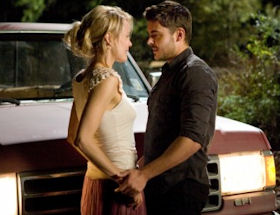 Director Scott Hicks (“Hearts in Atlantis,” “No Reservations”) has brought Nicholas Sparks’ 2008 war-torn love drama “The Lucky One” to the big screen with former “High School Musical” star Zac Efron in the lead.

Logan Thibault (Efron) is a young U.S. Marine on his third tour of duty in Iraq when something miraculous happens. In the middle of a combat zone, he sees something shining in the sunlight and goes to check on it. It turns out to be a picture of a beautiful blond woman. As soon as he reaches it, a rocket hits the exact place he was just standing. He survives but not all of his comrades do, so he believes that the woman in the picture is his guardian angel who saved him.

Once he returns home, it is apparent that he is shellshocked and he takes off on a journey to find a place where he belongs and, possibly, the woman in the picture.

After walking across many states, he finds the town in North Carolina where the woman lives. Her name is Beth Clayton (Taylor Schilling), she is divorced with a young son named Ben (Riley Thomas Stewart) and she runs a dog shelter out of her farm. Logan attempts to tell Beth the story of why he is there but he gets mistaken for a job applicant. He decides to work there and keep the photo a secret. As time passes, Beth begins to fall for his gentle nature and is pushed by her mother, Ellie (Blythe Danner), to pursue those feelings. Matters are made worse, though, when Logan finds out Beth’s ex-husband Keith (Jay R. Ferguson) is a jerk and one of the town’s sheriffs. Beth comes to know and like Logan, especially seeing how much he helps her son to come out of his shell. But as time passes and they become closer, it all is in danger of unraveling if Logan doesn’t tell her the truth.

Going into “The Lucky One,” I was familiar with Nicholas Sparks’s 17 books and the seven films adapted from them and I knew what to expect, so I wasn’t really surprised with the outcome of the film. Its predictable plot and emotional storyline is a standard when it comes to these movies. There were a few things that I did enjoy about the film, such as seeing Zac Efron embody a fully-realized adult character, as well as the adorable Riley Thomas Stewart and the cinematography/locations used in the film.

Efron has been in Hollywood for years and has been stuck in the teenager roles, but in “The Lucky One” his character Logan has a troubling past and major issues he is working on, coming back from a war is a big deal and I can’t even imagine the nightmares that would come from experiencing it. Although both Logan and Beth are damaged individuals, they seem to mesh well onscreen and help fill a void in each other’s lives and as a result the relationship seems plausible.

Riley Thomas Stewart plays a pivotal role in the movie by being the connection between the two leads and is a buffer for their wounded hearts — as Logan grows closer to Ben it opens up Beth’s heart to accept him. I only knew this young actor from one previous film, but I thoroughly enjoyed his wacky character in the movie. And I can’t forget to mention Blythe Danner, who is always delightful to see in any film. Her character had strength, determination and humor.

Lastly, the way the movie was shot, its use of natural light and gorgeous locations, made it a joy to watch. I kept finding myself just looking around at the scenery while watching the movie and I was constantly amazed at the beautiful vistas and locations. The cinematographer, Alar Kivilo, has shot films like “Lake House” and “The Blind Side” and has really perfected his craft.

Needless to say, this is a “Chick-Flick” and it isn’t trying to be anything else. It has its core set of fans — and their significant others — who will go see it no matter what critics say. It really is a film for those who liked the book, or are Zac Efron fans and doesn’t seem to cater to the tastes of anyone else.

“The Lucky One” is in theaters now and is rated PG-13 for some sexuality and violence.