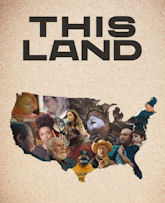 “This Land” is not so much a film as it is an ode to the people who make up the American electorate. Director Matthew Palmer (“Breakdown”) assembled a team of more than 50 filmmakers to shoot footage of selected people across the country on Nov. 3, 2020. That’s right. Election Day. Biden vs Trump. One of the most divisive elections in modern American history.

I refer to it as an ode because it is not a chronicle of election machinations and election day jitters, it is not a pitting of one side vs another, and it doesn’t feature the usual polar opposite talking heads (although Sean Hannity and Rachel Maddow are heard in the background at a few points).

Instead, it is a gentle look at the varied people, every day people, who happen to hold differing opinions on political issues, the importance of the election, and even whether voting will affect their lives.

The film begins with scenes from everyday life in the country, in the city, in the places in between. We see folks, young and old going about their everyday business. Hannity and Maddow espouse on the soundtrack, but folks aren’t really listening. The sky is blue, the grasses tall and dry as befits late fall.

We are introduced to some of them:

• A native American, who we first see hitting golf balls before the majestic but stark background of an Arizona reservation. He tells us he is described by people who know him as an “angel” because he loves everyone. But we also learn about his drug habits, his imprisonment for killing a man, and the deep bitterness he feels against American society. He refuses to vote for either “white man.”
• We meet a father, who voted for Trump in 2016, but, despite living his faith, saw his wife deported to Mexico and his son come down with cancer. He votes for a write-in candidate.
• A well-to-do gay couple, together for many years, suffer over their differing political view – views that have been magnified as this election approaches. The conservative man, black, finally tells his partner that the partner’s family’s “bigotry” over his conservative beliefs has pushed him further right. Despite that, they still love and honor each other.
• An inner city black woman sees nothing for her in the election (as does a white man who lives off the land in the woods). They lead their own lives regardless of politics, and are disconnected from the process.

There are many others – some seen only briefly, other, repeatedly. All their stories are the same: everyday joys and sorrows, struggles and triumphs, large and small, revealed against the backdrop of 2022.

A group sits around a table on a deck somewhere in the northwest perhaps. They are discussing politics, but the more important point in this serene setting is that they are people gathered together.

Palmer has given us a short (67 beautiful minutes) glimpse into who we really are, despite all the rancor and bluster of our fraught political system.

This is a film every political pundit should watch and ponder. If only they would.