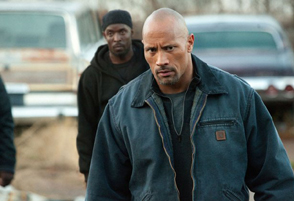 Although it has been fairly common to see athletes appear in films over the years, never before has one transitioned so well onto the silver screen as Dwayne “The Rock” Johnson. In a movie career that has now lasted more than a decade, Johnson took a professional wrestling career and has altered it into a full-fledged movie career.

Starting off with the slightly brutish role as the Scorpion King in 2001’s “The Mummy Returns,” he has made an action star of himself, and even though he has experimented with friendlier territory in “The Game Plan” and “Tooth Fairy” — which were not good films in my opinion — you can’t blame the guy for trying to add some diversity to the roles he chooses. Through every one of his films, he has shown many talents. He has shown his brute strength, fighting skills and even some comedic timing, but not until now has he had a role where he could really show off his actual acting skills.

“Snitch” is the first time his bouldering demeanor has been played down and we see him more as an everyman and that makes him relatable and the story more believable. Even though his forte is still as an action star, I would like to see him in more roles that show he actually can act and is more than just an action star. While the film is being promoted as an action film, it is actually a dramatic thriller. Yes, it has the action in the third act, but oddly enough the film is at its best before the car chases and massive gun fights in the third act.

When college-bound high school senior Jason Collins (Rafi Gavron) carelessly agrees to have a package delivered to his house from his friend Craig (James Allen McCune), he can’t expect what will come next. The package was full of drugs and was being tracked by the DEA, who caught Craig and struck a deal with him in order to reduce his sentence. Even though it is his very first arrest, Jason faces 10 years in prison due to a new law that has zero tolerance for drug distributors.

Distraught, Jason’s father, John Matthews (Dwayne Johnson), pleads with government worker Joanne Keeghan (Susan Sarandon) to reduce his son’s jail time. After finding out the only way for his sentence to be reduced is to snitch and help the DEA catch other high-ranking members of the drug underworld, John decides to infiltrate the seedy world of a drug empire himself and hopefully get enough evidence for arrests to be made.

John uses his own business to search for possible leads and his new employee, Daniel (Jon Bernthal), whose drug-related criminal history is just the thing he was looking for. Using Daniel for introductions, John is on his way to securing a massive amount of illegal substances and he makes a deal with local hot shot Malik (Michael Kenneth Williams) to transport a truckload of drugs into Mexico. Hoeverm he may have gotten more then he bargained for when drug Kingpin Juan Carlos “El Topo” Pintera (Benjamin Bratt) gets involved.

It is hard not to say that “Snitch” is very preachy with its startling look at laws and the harsh penalties a first time offender would receive. Making it a father and son story, emotions are evoked and you really want to see John succeed since his son Jason is not a bad kid, he just made a stupid mistake. While most people might be disappointed in the lack of typical action here, I think the dramatic side of “Snitch” is the best part of the film and it has showcases some thrilling and touching moments as well. The casting was good and it was nice to see the array of actors pop up that I had no idea were even in the film. One of those nice surprises was Barry Pepper as tattooed DEA agent Cooper, who plays a nice role in assisting John with the undercover operation.

The film is a cautionary tale as well as a detailed look into the precise consequences of our new laws and how there should always be a case-by-case basis for deciding punishment, not a single way to sentence everyone. “Snitch” had moments that made the film feel authentic and then others that made it look like a cliché. For those looking for classic Dwayne Johnson action, you might want to look elsewhere, because all of the action scenes showcased in the trailer are in the last 20 or so minutes and they feel rushed and out of place. The ending was my least favorite part of the film after getting such a great and out of character performance from Johnson throughout the film.

Although “Snitch” turned out to be completely different than what I was expected, I did enjoy many aspects of it and was delightfully surprised by the new side you get to see from Johnson. With a great supporting cast full of great character actors, the film was pretty solid. The story could have used some more work, but it entertained me overall. I can suggest it to those who are fans of Johnson’s work and would like to see him play a character he has never played before, and for those wanting heart-pounding action I would suggest you wait to catch him in either “G.I. Joe: Retaliation,” out in theaters March 29, or you can also see him in “Fast and Furious 6,” which is revving into theaters May 24.