The ‘Star Wars’ That Could Have Been 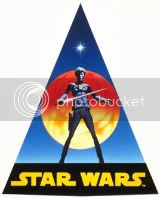 It goes without saying that George Lucas changed the face of film making and film-going itself with 1977’s “Star Wars.” It was a seminal master stroke that kick-started a renaissance of science fiction, launched the concepts of marketing and pre-release anticipation and turned Mark Hamill, Carrie Fisher and Harrison Ford into bonafide household names on a global scale.

The film let to a motion picture revolution the likes of which had never been seen … creating … well, damn near everything as we know it today!

THX, Pixar Studios, Industrial Light & Magic, Skywalker Sound and Lucasfilm Ltd. were all birthed. Steven Spielberg’s already impressive career got kicked into overdrive with Lucasfilm’s “Raiders of the Lost Ark,” Ridley Scott was inspired to put his own stamp on the genre with “Alien” and a cadre of filmmakers including James Cameron, Roland Emmerich and Peter Jackson took it as a sign of getting the ball rolling on each of their own careers.

Eventually, “Star Wars” became a trend in and of itself … a pop culture tidalwave that refuses … no, forbids to show any signs of slowing down.

Now … you either fell in love with or wanted to be the dashing Corellian smuggler Han Solo based on Harrison Ford’s wonderfully charismatic performance … but what if the role had been nabbed by Kurt Russell?

You thrilled to the adventures of Mark Hamill as the exuberant and earnest Luke Skywalker … but what if those adventures were that of a grizzled, bearded vet named Luke Starkiller?

You relished in the concept of the Force, the collective essence of all life that grants the Jedi their unique gifts … but what if it had been the galactic holy grail known as the Kaiber Crystal?

It’s an interesting notion to take a look at such things.

I mean, can you imagine seeing Mark Hamill gallivanting around in that futuristic scuba-diver get up from Ralph McQuarrie’s conceptual art? Or Han Solo as an alien character rather than a human? What if Chewbacca looked more like a giant cross between a lemur and rat instead of the bear-like malamute inspired Wookiee we all know? Or if, instead of the sleek and mechanical Dark Lord of the Sith, Darth Vader was more in line with earlier designs that depicted him as more of a nomad samurai with an elongated helmet and ragged black robes?

Now, of course, I know most of you are fully aware of these points; the numerous actors who tested for Luke, Han and Leia … the story concepts that were either reworked or abandoned by Lucas as he refined the parameters of his opus.
And, given how the film turned out, we can all be glad of that final product.

But I’m asking you to put your bias aside and imagine the “Star Wars” that could’ve been.
Could it have been as successful? As influential? As culturally universal? Would it have stood the test of time or would it have fallen into the same obscurity as other ’70s Sci-Fi fair? And if it had been made a different way, would it have then become a different kind of cult film … more in league with David Lynch’s “Dune” or Sam Raimi’s “Darkman?”

Divorcing myself from both my appreciation of “Star Wars” and its influence, I’ll do what looks like few … scratch that … what looks like no other writer has done … and answer these questions myself; on my own terms and from my personal point of view.

In my opinion, the impact of “Star Wars,” had these aforementioned difference been in place, might’ve altered and … worst-case scenario … lessened ever so slightly. But I honestly feel that the essence of Lucas’ story and the notion of contemporizing mythology and the collective culture’s understanding of the hero’s journey would have still remained intact and “Star Wars” would’ve still been successful.

Of course, it still would’ve been visually arresting and I’m sure die-hard science fiction enthusiasts would’ve still accepted it and would’ve been appreciative of it … just , as I said, perhaps in a different way.

An interesting notion is that of Han Solo as an extra terrestrial. Had this come to pass and the character had been bogged down by make up and prosthetics, it’s reasonable to assume that the male-sex appeal of the film would’ve wound up solely on the shoulders of Mark Hamill … which, thinking about it now, seems to be an odd proposal (though I wouldn’t be naïve to judge — if women prefer Luke to Han that’s there own prerogative).

An even more intriguing idea is that of the budding relationship between Han and Leia that obviously went on to become fully expressed in “The Empire Strikes Back” as they began a romance with one another.

Now, of course, a well-documented hot-button topic in the ’70s was that of interracial couples.

If the sexual tension between Carrie and Harrison had instead been placed between a woman and an alien, it would’ve been a definite touchstone in the proceedings of that issue … and it would’ve been a ballsy move on Lucas’ part to make such a firm statement in combat of that intolerance.

A lesser note I’d like to make is on Darth Vader. Personally, while I have no problems whatsoever with the machine-man motif, the designs of a more samurai-esque Vader look incredibly inspired.

Had this visual approach been used and this aesthetic been expanded upon even further it might’ve brought a heightened sense of regalness to the concepts of the Jedi and Sith … playing up the respective angles of the Samurai and Ninja even more so.

Despite these personal answers, we’ll never know the true outcome had things been any different … but it’s fun to consider the outcome had the stars been in an altered alignment; or, dare I say, not in alignment at all.

Looking back within the archives of concept art, character designs, screenplay drafts and screen tests, it is incredibly fascinating to consider the nearly countless alternative paths that “Star Wars” could taken … all of the different beasts it could have become.

But in doing so, for me personally, it reminded me of how grateful I and the massive amount of fans of the saga must be and should be for the path Lucas ultimately chose for his galactic fairy tale.

In all its groundbreaking, captivating and revolutionary glory.
The Force is strong with “Star Wars” … and it always will be.