The Top 5 Movies That Should Be Remade

A little while ago, I was charged with drafting a list of The Top 5 Movies Which Should Never Be Remade and at the time I considered it to be something of a challenge. Certainly, it’s a completely relevant topic, given that we’re living in an age fraught with the silly things, and entering a season boasting more than a few — many annoyingly redundant (“A Nightmare on Elm Street” screams the word “Pointless!” in big, bold letters for 95 tedious minutes straight) and some that sound kinda fun (you can put me down for being excited for “Piranha 3D,” and I’m sure many-a-family are going to wind up enjoying the well-marketed “Karate/Kung Fu Kid”) — but are any of them in any way necessary?

Probably not, so when I was asked to make a complementary list naming the Top 5 Films Which Should Be Remade, I had a momentary brain-short. After all, is there such thing as a film demanding a remake? At first, I wasn’t sure there was.

However, after hemming and hawing for a while, I began to think about “Clash of the Titans,” and how, in a perfect world, it could have honored the original while still making daring creative decisions and running loco with its earth-rumbling premise. That it didn’t is beside the point; what mattered was that it almost seemed to cry out for the resources available in our modern filmmaking age.

Thus, I decided to pick and choose from the Mack truck-load of lousy and underwhelming movies littering my personal film-watching history and attempt to pick out the ones which boasted a great hook, or conceptual idea, but hydroplaned on their journey to the big-screen. This isn’t a definitive list — there are thousands more where these losers came from — but rather a selection of prospects that, done right for a change, could offer ticket-buyers something amusing, exciting, moving or quirky – perhaps even a combination of those desired qualities.

Before diving in, a few of the titles which didn’t manage to worm their way onto the list: “The Long Kiss Goodnight” (famed for its great Shane Black-penned script, but, in its current form, a bit of a bore); “Striptease” (Carl Hiaasen’s novel is a far smarter, stylish affair than the Demi Moore vehicle which resulted from it); and “One Million Years BC” (iconic — and ridiculously hot — Raquel Welch aside, this flick’s a serious slog, despite a gloriously campy and appealing premise). I’d also love to see great “Tom Sawyer” film, but that falls more into adaptations than remakes, as no one – and I mean NO ONE – wants to see another version of “Tom and Huck.”

Enough babbling, though, on with the Top 5!

5) “Of Unknown Origin” — This fairly obscure 1985 psychological horror flick is an ideal property for remaking as, well, no one has really heard of it. Directed by “Rambo: First Blood Part II” and “Cobra” helmer George P. Cosmatos, “Origin” stars Peter Weller as a driven professional, and married father, who spends a hot summer alone in his New York apartment tirelessly attempting to complete a major corporate project that will earn him a promotion. Sounds a bit mundane, you say? Well, did I mention that he finds his work drastically interrupted by a basement-dwelling giant rat? A rat which provokes an increasingly animalistic battle for supremacy of the comfortable domicile? Part darkly humorous satire, part allegory and part freaky-deaky creature feature, a well-executed remake could be a seriously disturbing, vicious and claustrophobic pitch black comedy that could appeal to the film-geek crowd and those constantly on the prowl for weird off-beat gems. If there’s a young aspiring talent out there with sicko Cronenberg-like sensibilities, this could be one hell of an attention-grabbing platform.

4) “My Stepmother Is An Alien” — Sure, the 1988 original was something of a popular kid-pleasing entertainment when it hit video, and featured a fairly graphic sex scene that was a mighty-fascinating eye-opener for my single-digit-aged friends and I, but, frankly, it’s a pretty bad movie. With that said, the flick’s endearing high concept sci-fi-lite hook could, given the proper writers, be utilized in fashioning a genuine crowd-pleasing comedic effort. Even more thrilling, though, would be the pleasant opportunity to give a hilarious female comedienne a showcase to really show off what they can do. Although Kim Basinger displayed a true knack for infectiously playful rubber-limbed antics in the first effort, just imagine for a second what the always-awesome Kristen Wiig would be able to bring to the same broad role! This could be a perfect vehicle for her own specialized brand of awkward stream-of-consciousness chatter and it would be a treat to see her make the loopy most out of portraying a character learning to operate her own body. The pitfalls in pulling off this remake successfully are many, but the rewards, if triumphant, could be out of this world.

3) “The Outsiders” — I’d imagine most of you read S. E. Hinton’s beloved young-adult novel in elementary school – probably around grade six or so – and, like me, were captivated by the wrenching, heartbreaking coming-of-age tale of young Ponyboy Curtis. I’m also going to guess that significantly fewer of you feel anywhere near as passionate or nostalgic towards Francis Ford Coppola’s 1983 film adaptation which, despite being loaded with charismatic aspiring superstars (Tom Cruise, Matt Dillon, Patrick Swayze, Diane Lane, Emilio Estevez, Rob Lowe – to name a few), was a disappointingly superficial, uninvolving clunker which lacked any of the book’s gritty charm and heart. While I’m not at all confident that Hollywood wouldn’t try to “Twilight”-it-up if it were to be tackled again, I’d love to see a director truly plunge into Hinton’s world and honor her timeless story. Spike Jonze recently portrayed the frustrations of childhood brilliantly in “Where the Wild Things Are” and, with his indie punk sensibilities, he would be a killer choice to bring Pony Boy, Dallas, Johnny, Two-bit, Sodapop and the rest of the scrappy gang back to the silver screen.

2) “Attack of the Killer Tomatoes” — Why? Because it’s a truly awful movie that nonetheless boasts a terrific, unforgettable title and premise. Intended as a spoof of the B-movie horror efforts of the fifties, John de Bello’s 1978 cult groaner is probably better remembered for managing to sucker in untold swarms of curious movie-goers with its bizarre poster and trailers, and also for later inspiring a sequel starring George Clooney. I’d like to see where a cinematic comedy talent like Adam McKay (“Anchorman,” “Talladega Nights”) or Todd Phillips (“The Hangover,” “Starsky & Hutch”) could take this massively marketable, ludicrous concept. The original film featured a team of tomato-busters that included a scuba-diver who refused to remove his wetsuit and a master of disguise whose specialty was dressing like an African-American Hitler. This odd gang of misfit characters could allow for rich ensemble casting opportunities and plenty of room for amazing, catsup-coated improv sessions. Plus, since the first “Attack” was so lame, there’s precious little audience emotional attachment to it. Hence, the filmmakers would have free reign to pick and choose whatever they wanted from the established “mythology” (if anything) and feel free to deep six the rest. If given a modest budget, a PG-13 rating, a madcap trailer and a summertime release date, there’s little reason why “Attack of the Killer Tomatoes” couldn’t roll itself into plenty of green. 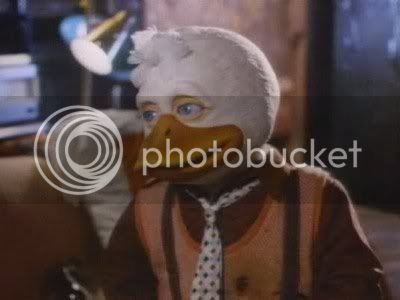 1) “Howard the Duck” — I know, I know, the wounds still haven’t quite healed from helmer Willard Huyck (who actually never directed again afterwards …) and producer George Lucas’ legendary 1988 box-office belly-flop, but it’s time that we, as a society, begin to move forward and at least consider allowing the titular avian antihero back into our multiplex. As we’re currently occupying the big boom for Marvel comic-book properties transitioning to the big-screen – and Howard is indeed owned by the House of Ideas – it’s time that someone gave writer Steve Gerber and artist Val Mayerik’s ill-tempered, wise-cracking creation a proper venue to properly display his sarcastic talents. Rather than gussy up the character for a family-friendly special effects blockbuster – as Lucas disastrously did – someone needs to tap into the character’s sharp-tongued roots and deliver a crude comic examination of humanity’s idiocy and shortcomings from the point of view of a waddling intergalactic outsider – with plenty of meta humor thrown in for good measure. If I had my pick, I’d hand the job off to Terry Zwigoff, of “Ghost World” and “Bad Santa” fame, and let him run freakin’ hog wild with it. Produce the film on the cheaper side – along the lines of Marvel’s current small films business plan – and it’d be more or less a no-risk venture; one that could lead to fanboy-driven cult status (ala “Kick-Ass”) or even yield franchise potential. And maybe, just maybe, filmgoers would be able to once again utter Howard’s name without shuddering from having had to bear witness his and Lea Thompson’s unsettling near-feather-on-flesh love session.

Agree? Disagree? Let us know in the comments section.