A Scene from ‘Welcome to the Rileys’ 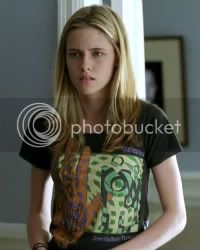 James Gandolfini asserts his authority upon Kristen Stewart in this clip from “Welcome to the Rileys,” a Sundancer in which the girl who played Bella in “Twilight” is chastised for appearing cheap, immature and uneducated. In “Twilight” Stewart runs into the arms of any guy who takes his shirt off; in “Welcome” she’s allegedly not averse to parading about the apartment undressed, if we’re to believe what Gandolfini suggests. The film’s got a mixed reception since unveiling at Sundance, though for their part, Gandolfini and Stewart have been praised for their performances, The Hollywood Reporter’s Kirk Honeycutt suggesting the familiarity of the tale being told is overcome by these dramatic displays.

Gandolfini plays a “damaged” character whose business trip out to New Orleans sees him eventually landed with Stewart’s wayward young woman, a situation that could either prove to be an act of salvation for his character or an utter mistake. If it seems a good set-up for an opposites attract style comedy, reviews and plot descriptions suggest a more grittily dramatic take on the scenario, the sense of loss Gandolfini’s character feels coming through the death of his beloved teen daughter. No prizes for guessing exactly what Stewart represents for the grieving, aging man, then.

The clip in question is neither amusing nor particularly inspiring, and is more or less one of the little moments of conflict you’ll find scattered throughout the film. There’s little to gauge from it besides the outlines of the characters that Gandolfini and Stewart are playing. They take on the scene well but it won’t work outside of the film entire, which some naysayers have been suggesting plays a little too prolonged and drawn out, hinting at a whole lotta navel-gazing and visual symbolism. “Welcome to the Rileys” could either be a quirky little drama in the mode of “Sunshine Cleaning” or “Love Liza,” but guesses as to what its level of success are going to be aren’t helped — at least when it comes to mainstream viewers — by the names involved with the making of the film. Director Jake Scott is another music video director trying for a film career, and I’m not familiar with the work of screenwriter Ken Hixon, though his IMDb profile suggest he isn’t exactly prolific.

The cast are a decent bunch though. Stewart may have a habit of riding the same facial expression over and over again, but she’s been good when she hasn’t really had to manipulate herself to fit roles (her best work: “Panic Room” and “Into the Wild”). Gandolfini has often concerned himself with middle-of-the-road comedy, so it’ll be interesting to watch how he portrays a clearly restrained man with a history. Melissa Leo’s getting praise for her part, while the supporting names of David Jensen, Lance E. Nichols and Kathy Lamkin might be recognisable to followers of more independent fare. Can they elevate what looks to be a somewhat mundane affair to the level of worthy entertainment?

“Welcome to the Rileys” hit Sundance on Jan 23. and is hoping to score theatrical distribution in 2010.