Plot holes are Hollywood’s potholes. What started out as a laugh at the film-makers mistakes is now a cottage industry.

The quality of a film is no protection from the gaffs which drive director’s to despair. Did Sergio Leone notice the car driving across the background as Eli Wallach climbed into the noose at the end of “The Good, The Bad and The Ugly”? Was there a care in the world when galvanised steel platforms or bound books appear in the original “Ben-Hur”?

But these are continuity errors; plot holes change the outcomes. And it’s plot holes we’re after — the sort which break the front axle of the story halfway through.

Here are five of the most notable plot holes so far.

“Rosebud…”
That is the last word of Charles Foster Kane in Orson Welles’ classic film “Citizen Kane” (which should never fall victim to the Hollywood remake). The newspaper baron sparks a media frenzy as reporters investigate the meaning of his cryptic departure from this mortal coil.

It’s a shame that the biggest question of all in the film is never answered. Oh, we find out what Rosebud is — you’d have to, it sort of defeats the object of the film otherwise — but nobody tells us how the dying words are known since Charles Foster Kane died alone.

The film would have been considerably shorter had the question been known:
“What were his last words?”
“Don’t know. He died a sad and lonely man.”
Cue end titles.

There’s not much money to be made once word of a film which lasts 30 seconds gets out.

James Cameron’s epic movie franchise spawned four sequels and a television series, as well as graphic novels and video games. The Library of Congress deemed it worthy of archiving in the National Film Registry while everyone in the world thought that they were the best Arnold Schwarzenegger impersonator. Ever.

In fairness to Cameron and the scriptwriters, there wasn’t a bad film among the quintet — which is surprising by Hollywood standards. And to think, the film could have ended in the first reel. Could? Should, if Skynet was as clever as it thought.

In the future world, Skynet is jolly clever. So clever, in fact, that it needed to start a war with mankind. John Connor emerged as the human race’s saviour and we know the rest.
With the advent of time travel, and all of Skynet’s super-awesomeness, why send a Terminator back to kill Sarah Connor? If Arnie doesn’t come back from 2029 to 1984, there’s no reason for Kyle Reese to go to back and become John Connor’s father. In short, John Connor is never born. 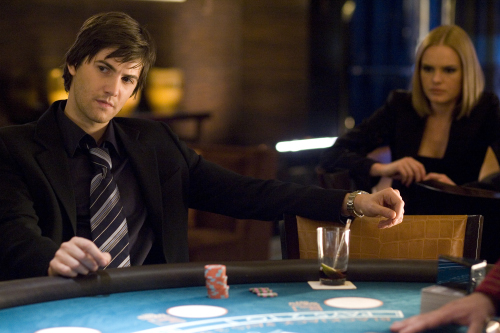 If you’re going to write a script about a card game, it’s probably useful to have some knowledge of the basics of the game. A storyline dealing with card counting, for example, ought to know face cards values are -1, so when the count is 18, it’s going to fall to 17.

That’s the complex stuff. “21” featured more plot holes than a field ravaged by moles. They even got the basics wrong. Sierra Summers, for example, should have known better in the Riviera Casino.

Facing a dealer with an upcard of 6, she played her pair of 7s. It was a rookie mistake — 14 vs. an upcard of 6? Splitting the 7s was the move, using a technique common among blackjack players. Which rather begs the question where had she been because it sure isn’t at the blackjack table learning her trade. 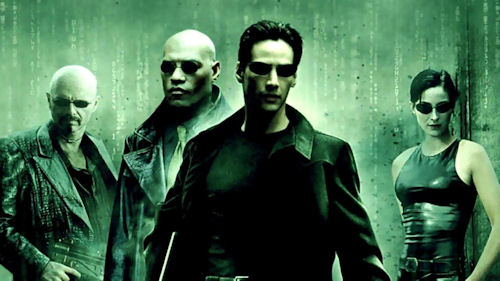 Man has a real downer on machines in movies. Computers in particular get a bad rap. The English actor is always the baddie in any film, except when chips and motherboards get involved. And then there’s one Hal of a mess.

The Matrix was no different. Man went into “Oh, look at me, I’m clever” mode and blocked out the sun, cutting off the machines primary power source. Man scores and celebrates.

All too late, as Man would recognise it is, in fact, an own goal he has scored because blocking out the sun means messing the planet eco-system and sending Mother Nature into a vengeful tizz. In fact, Man would die out before the machines.

The plan may need a tweak or two before it can be classified as a resounding success. 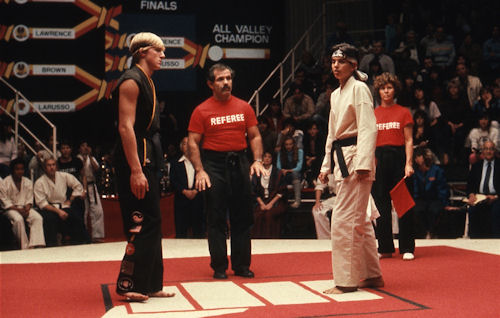 Cheats never prosper. Except in Hollywood. The rules of the tournament are oft-repeated in the original movie — kicks to the head are forbidden and will result in disqualification. Yet one kick to the head later, we see Daniel win the cup and leave arch-foe, Johnny, sprawled in a heap.

The moral of the story is … lost in a welter of cheats always prosper. Unless they are bullies.