This low-key pot boiler had its New York premiere June 1 at The Film Society of Lincoln Center and Istituto Luce Cinecittà’s 17th edition of “Open Roads: New Italian Cinema” taking place the first week of June. The movie deals with a final judgment enacted on economic kingpins who have abandoned leadership in favor of divine isolation. 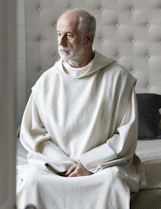 Director Roberto Ando re-teams with Toni Servillo at his deadpan understated best. He plays a monk mute but for a wisecrack for every snarky attack from his new-found companions, Europe’s ruling class bourgeoisie Brahmins. A sequel to Ando’s “Long Live Freedom” (Viva la Liberta — a 2014 Open Roads selection), he re-teams not only with Servillo but with his co-writer Angelo Pasquini. The director/writer team took home the David di Donatello award for Best Screenplay with the film in 2013.

The feeling of dread that permeates this story is akin to the wonderful creepiness of Edgar Allan Poe. In his story “The Assignation,” a stranger becomes an unwitting witness to a horrific crime of honor. He is chosen by the protagonist not because he knows the moral quicksand in which the man has found himself. Exactly the opposite, the stranger is chosen because he knows nearly nothing about the man. He is to be a witness but not a judge. The monk is a good bet but the success of that gamble is left to the viewer.

A G8 meeting attended by the wealthy and powerful (and clever and beautiful) is augmented by three strangers at the request of IMF director Daniel Roche (Daniel Auteuil). It is testimony to the eccentric genius, and impenetrable egos, of those present that no one asks why Roche has insisted on including a priest, a rock star (Johan Heldenbergh) and a children’s novelist (Connie Nielsen) in the most exclusive of conferences. Roche has something to say, and he has assembled a very special group to which to say it.

At the time of death, the place and purpose of the delegation is discussed in the context of world suffering. There is an indication of last rites not only being given for Roche, but for humanity. As Roche may well be considering ending his life, he also appears to consider humanity itself morally dead. Greek austerity measures are alluded to, the scourging of an apple tree by animals that feed from the bottom first. Those at the top are completely unaware. Those at the bottom will lose everything; jobs, wealth, families. Even their honor.

The clinging sense of doom is accented by droll scenes of social commentary. The hotel owner, one of the old elite now stricken by Alzheimer’s, is faithfully attended to, night and day, by his children. They ignored him until they realized the man had forgotten the Swiss bank code to his fortune.

Be there or be sanctioned.