Director Colin Trevorrow lands on the audience with both feet and eight claws in this thermo-nuclear explosion of dinosaur interactions that go horribly wrong. This is exactly what one would expect, given that mankind seems intent on finagling chromosomes until Hammond won’t have it and given the fact that since the original “Jurassic Park” worked so well, the plot was mostly copied for this updated version. Updated, that is, with vastly amplified special effects.

The viewer knows exactly what is coming when co-lead Bryce Dallas Howard, as Claire, a sort of general manager cum-PR front woman for the Jurassic World theme park, explains to 20,000 tourists that nobody is interested in just plain dinosaurs anymore, so we have to grow new ones.

Are the new ones bigger, faster, stronger, smarter, hungrier and uglier than the plain old T-rex? You bet, and boy are we glad they are. The latest model eats heavily armed “Blackwater” style killers like we pop M&Ms.

The only significant change in the plot is significant. Co-lead Chris Pratt plays dinosaur trainer Owen who proves that it is possible to reach a working relationship with the formerly intractable raptors by talking to them in stern tones and feeding them reward treats. Much like one would train a poodle, except two inch thick stainless steel is used instead of a leash. If things do not work out, instead of cleaning up a mess on the carpet the trainer ends up inspecting the raptors tummy from the inside.

Owen’s nemesis is military assassin corporate operative Hoskins, played to the hilt by a wonderfully misbehaving Vincent D’Onofrio, who believes that anything bred to kill is capable of being used to, well, kill. Owen refutes this and lives the dream that humans can share productive lives of mutual respect with test-tube bred combinations of prehistoric animals combined with snakes, lizards and other soulful creatures. He would have been able to reduce the stainless steel down to one inch think if not for the unfortunate incident (you know the one) and Hoskins’ entertaining attempts at assassinating the monsters with Tasers.

OK, the flick wanders a little bit into the unbelievable, here and there, but when that pterodactyl beak comes slamming into your helicopter, you get the idea.

The film is available in IMAX 3-D and that is the way to see it. The cinematography by John Schwartzman and editing by Kevin Stitt are world class. Their combined credits reads like an encyclopedia of sci-fi action hits. Michael Giacchino’s music is too loud and virtually bashes the viewer into submission, as if the super-rex jumping into the audience to share the popcorn is not enough.

B.D. Wong’s return from “Park” as lab-master Dr. Henry Wu is like seeing an old pal, or, perhaps, a bent old pal, as he manipulates the murderous melee to suit his own ends and to ensure the birth of yet another sequel. Irrfan Khan drops in after his performance as the adult Pi Patel in “Life of Pi” and does a great, if one-dimensional, job as head corporate honcho of the park. 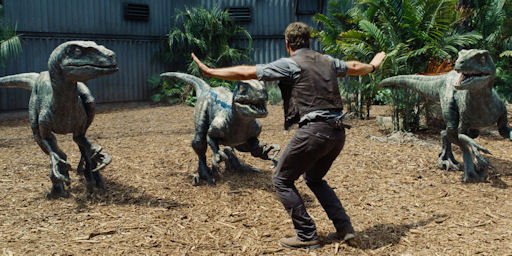