Ignore the time travel science-babble and concentrate on the feeling of a nuclear holocaust that seethes into your theatre and plants flying buses in your lap. 3-D IMAX is the only way to see the latest in the Terminator franchise, a sci-fi cauldron with a, yes, charming, Arnold Schwarzenegger popping in and out of the action. 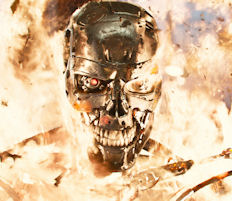 Times are hard on a nuked earth. The machines have won. Thanks to omnipresent computer use (“We let the machines in the front door!”) the network has reached critical mass and pitted the world’s powers against one another. The result is a spectacular first 10 minutes showing San Francisco buses flying through the air as the distant nuke flash and shock wave turn the City by the Bay into the shake and bake bag of central California.

If you liked seeing the Golden Gate smashed by flying container ships in “San Andreas” you will love this thoroughly scientific and well executed vision of the hurricane of building pieces wrought by a nuclear blast.

Unfortunately, it is all downhill from there. But it is a big hill and there are still plenty of excellent shape-shifting, time travel and body disintegrating special effects to be had for the intrepid viewer that goes along with the gag. Check your text messages during the martial arts scenes; you have seen them all before.

Wonderfully scarred John Connor (Jason Clarke) has rallied the humans to hold off the machines. The fly in the ointment is that Connor’s mother is the target of an assassination attempt 30 years earlier. Enter the Guardian aid and abet the efforts of uber-fighter Kyle Reese (Jai Courtney) in outfoxing the machines and saving ma Sarah (Emilia Clarke) from shape shifting assassins who cannot be killed with anything resembling a normal machine gun. Luckily, this does not stop Kyle and Sarah from blasting away with the usual selection of exotic small arms, selling tickets to that valued gun-fetish segment of the film’s demographic.

The fact that bullets do nothing never fazes the plucky duo who counter with at least a couple new tricks, dissolving the shape-shifters with an acid bath and pulling the super-villain apart with a medical MRI. The car chases are a waste of time and the helicopter chase is even worse. Move over, Bond, there is a new kid in town. Or, there was a new kid in town. Or, there are two new kids in town and they are the same kid.

Without getting too deep into the spoilers (in fact, it is impossible to spoil the film’s pretzel logic), the key quote of the film is “You can’t kill us, we are your future parents!” If you can pick up on that, you will be far ahead of most.

Director Alan Taylor does what he has to, but leaves the spotlight to Arnold when it comes to the inside joke mugging and the Olympic quality eyebrows. Cinematography by five-time Emmy nominee Kramer Morgenthau, editing by Roger Barton (who has the “Star Wars” and “Transformers” franchises under his laser armor) and splash-o-matic work by an equally flashy crew make this film a great ride.

Be there or be yesterday.