With “Cartel Land,” film-maker Matthew Heineman obtains unmatched access to the Mexican drug business and executes a heart rending story of the fight locals are waging against the megalithic force of drug cartels.

The film starts out with a riveting look at a meth cook. Unlike the middle-class surroundings of the “Breaking Bad” series, this cook takes place in open, pitch black darkness of the night desert. There are no PhD chemists, beakers, vacuum distillers, tedious mixing or intricate operations. In fact, there is no lab. The process is done on the ground with 50-gallon chemical drums, plastic buckets and camp stoves. It is done under flashlights with a small group of bored, heavily armed gangsters standing by. 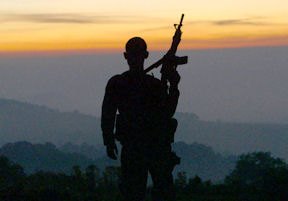 The street value of this cook is well into six figures. The product will be taken over the nearby border by a scraggly bunch of unskilled laborers who know nothing more than where to take the product and how to negotiate the unforgiving desert. There is no agenda, no future, no past. Make the drugs, haul them across one of hundreds of routes into the USA, get caught or not, collect the money and eat, or go to jail and starve.

US and Mexican government forces costing billions a year are pitted against this guerilla drug operation and the government is losing. The corruption and inefficiency of the military and police are no match for desert operations that have no base, no named operatives and, most importantly, no alternative. The release of this film comes on the heels of the announcement that drug boss Joaquin Guzman, known as “El Chapo,” has escaped from a top security prison in Mexico. Engineering a tunnel a mile long, he walked under the walls to freedom. Clearly, the solution is not in conventional law enforcement or supposed security.

Two grassroots vigilante operations recruit local citizens to fight against the cartels. One in Arizona, the Arizona Border Recon, and the Auto Defensas in Michoacan. Although they fight a good fight, they are hampered by internal conflicts and rivalries and, in the end, by their own rejection of the existing legal structure. The Arizona group exhibits deep seated racist and supremacy angst and their Michoacan counterparts are so thoroughly infiltrated by corrupt government forces that it is impossible to tell the good guys from the bad.

Although the film begins as a story of these vigilantes fighting for the rights of the commoners, it dramatically increases its scope as the battle widens on screen. Non-stop documentary footage depicts local support ebbing and flowing as the groups themselves question who they are and why they are fighting. In the end, the message is clear. If North America wants drugs and has an endless supply of money, the drug flow will continue regardless of what anybody does (or says they are doing) to stop it.

There are no solutions here, just the best look available at the real problems. For a further (depressing) look at the issue, see Gianfranco Rosi’s 2010 “El Sicario, Room 64,” an interview with a cartel lieutenant with a quarter million dollar price on his head. 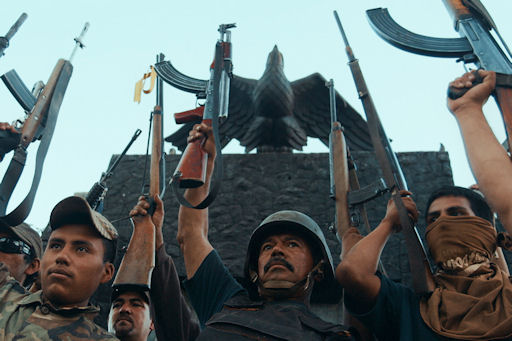