Review: Death on the Nile

Imagine you are young, of good family, vibrant, intelligent and in love. Desperately in love with a wonderful man for whom you would do anything. This is at the heart of Agatha Christie’s 1937 classic “Death on the Nile.” The late (she died in 1976, two years before the release of the first film version of her novel) Dame Christie’s books have sold over two billion copies, and this is one of her most popular. In the early 1930s, she cruised the Nile with her second husband, archaeologist Max Mallowan, and her daughter, seeing many of the sites later used in the book.

Jackie de Bellefort (Emma Mackey) is the young woman mentioned above. She loves, and is loved by Simon Doyle (Armie Hammer) – until he meets Jackie’s wealthy and ruthless American friend, Linnet Ridgeway (Gal Gadot). Linnet steals Simon away from Jackie, breaking her heart and creating in her a mortal enemy.

This is an elegant, if bizarre film. The budget was $90 million, and every dollar is visible in the gorgeously detailed, period sets, the beautiful cinematography, and the familiar Egyptian monuments. Sadly, that is about all there is. The characters are hollow, with no one likable, even in their eccentricities. Poirot’s himself is distorted by references to a youthful love lost and later a hint of love gained. This is not the Poirot of Christie’s creation. In addition, there are periods of great action, even pandemonium, sandwiched between longer languid intervals that slow the progress of the tale.

There are some delightful bits along the way: a Nile crocodile snags a white egret as it attempts to flee from a rocky perch midst the riverbank reeds; Poirot unable to decide which six of seven elegant desserts to enjoy (he will not eat all seven); a brutal dressing-down delivered to Poirot by Rosalie Otterbourne (Letitia Wright), and the surprise appearance of an electric guitar played by strolling jazz songstress Salome Otterbourne (Sophie Okonedo). The electric pickup for a guitar dates back to 1935. But these bits are far from enough to salvage this disappointing, mis-retelling of a beloved tale.

The picture has not done well at the box office. Many reasons are given, including the delays caused by the pandemic and the scandal surrounding Armie Hammer. The one not given is that this is a showy but empty production. Perhaps the one thing it does get right is the feeling of disappointment – even despair – as the main action ends. There is a brief epilogue, but it detracts from rather than adding to the story. 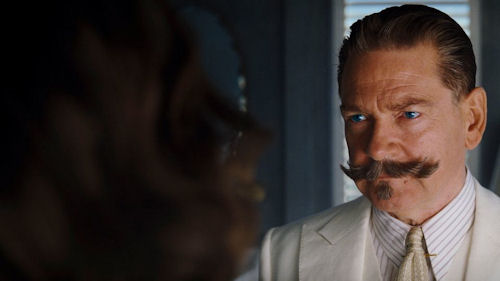