Review: My Little One 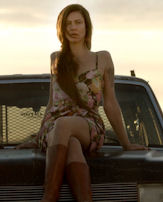 From the moment we see 10-year-old Frida, with red and yellow Indian war stripes streaked across her face, screech up in an old, beat-up and perhaps stolen truck, we suspect things aren’t exactly as they should be. We are assured of this assumption after we learn she has come down the road to pick up her mother’s two lovers from ten years ago. Yep, you got the math.

Even though the action takes place in the American desert of Navajo country with looming rock mountains in the distance, the passion-charged members of the adult ménage à trois unexpectedly speak French. In addition, the beautiful Anna Mouglalis (Jade), the haunting allure of this triangle, speaks in a man’s voice. As the seductive siren, she has invited her two lovers to her trailer home for one last time together.

The premiere model for Chanel since 2002 and “one of France’s most captivating actresses,” Mouglalis brings primitive enchantment to this story of social anarchy. She has brought up her daughter, Frida (brilliantly played by Ruby Matenko), to disdain social institutions, including school. “Mom says school is a patriotic brainwashing machine.” She has led her life in freedom to design her own life, and she wants her lovers to see it.

Wary of dominance and oppression, Jade has taught her daughter to be strong and self-reliant. When one of the men gently puts a hand on her, Frida kicks him hard, telling him her mother told her to kick any man who touches her.

All four characters have lived a life on the outside, breaking the confines of society in their gravitation to determining their own destinies. While Alex has never recovered from their break-up ten years ago, by some unfortunate vortex of weather, politics and geography, Bono came in from the cold. He now has a secure job, family and children. As a matter of fact, he is having a hard time explaining his prolonged absence as the magnetic call of seductive Jade leads them back, helplessly, into their ménage.

Co-directors and script collaborators Frédéric Choffat and Julie Gilbert tackle love, parenting, death, indigenous rights and anarchy in this truly haunting film of extraordinary impact. Their film asks the viewer, if completely free and brave, how would you live your life?

Mathieu Demy and Vincent Bonillo, who play Alex and Bono in the trio, bring in an objective sense to the more spiritual, enticing Jade and her free spirited daughter. Together, their characters cross-stitch into an outstanding ensemble of exceptional art, founded in a belief that we actually do have the freedom to create the life we want – to a certain extent.

“My Little One” is now available on Vimeo, Amazon US, Amazon Canada and Tubi with additional platforms to follow.