Review: Dolemite Is My Name 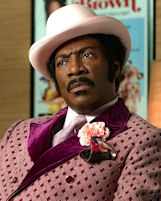 Eddie Murphy gambles that he is able to make a movie about Blaxploitation that is not Blaxploitation. Win or lose, he is having a heckuva good time making the film, and at least some of that heartfelt love of the craft is bound to rub off.

In the fast changing times of 1960s America, Rudy Ray Moore was floundering. A marginal standup comedian and mostly low-pay/no-pay MC in cheesy nightclubs, he saw the need for a change. To be specific, he saw that he had to change. He did not like Redd Foxx, Marvin Gaye, Sly Stone or any of the other black performers who were grabbing the limelight from the old guard. Sharing the liberating victories of the Civil Rights movement, and the yeasty vernacular of the Hippies, they leveraged the Black lexicon into middle class media. To a degree.

As the movie tells it, the rags-to-riches story that follows not only shows Moore managing the cut-throat world of film production like Sam Goldwin himself, but leveraging the trifecta of stand-up, records and movies to amass a king’s ransom in profits.

Buried in the midst of his first film screenings is the suggestion of the realization that, although the movies were successful camp comedies, the audience was not seeing them at all as Moore had imagined. The bloody reviews and the audiences howling at the painfully bad production could have wrecked a lesser person. Instead, the filmmaker pivoted, doubled down, and laughed along with them all the way to the bank.

If you think you see a hint of the brilliant and heart breaking “Ed Wood” in this flick, it is because you do. The same writing team of Scott Alexander and Larry Karaszewski is responsible for the magic of both movies. The work experience of the two writing Milos Foreman’s “The People vs. Larry Flynt” did not hurt either.

Building on his Oscar-winning “Hustle and Flow,” director Craig Brewer pulled a rabbit out of the hat getting paired with Murphy. Brewer’s earlier neo-Blaxploitation “Black Snake Moan” set him up with the street cred. Having said that, the costumes in this flick alone are worth the price of admission. Triple Oscar-nominated Ruth E. Carter won for her work in “Black Panther” in 2018 and is headed for another nomination here.

If Eddie Murphy wanted to make this a film with a moral, he failed. If he wanted to show the many sides of who is getting the last laugh, he told that tale successfully. In the end, all Rudy Ray Moore really wanted to do was stand in front of a crowd and entertain; be happy and make others happy. As this tale is told, he succeeded. 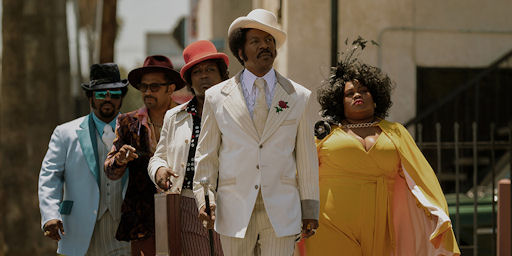