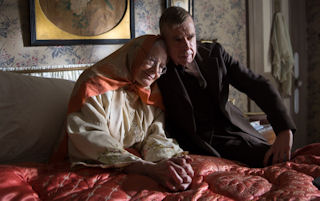 Imperious as she was, L.S. Lowry loved her. What is more, he reflected on her every day for that day’s vision of himself. His outside reality was to stay as far from reality as possible. It was a hard life and he did not want any more to do with it than necessary. It was to his mother he fled, looking for validation as a good son and a good artist. From what we can tell, his mother never gave him either one (“Why can’t you just do normal painting?”). In spite of that, he was good son, and a good painter.

To play the nervous mom, bedridden and in ill health, is one thing. Far harder is it to be the obedient son, registering the blows and carrying on anyway. He described his father as a man living from day to day; a man who saw life as not so much something to live, as something to get through. Maybe this was because of his wife, who saw the glass not half full, but broken and threatening grievous injury.

Although the film lists nearly two dozen producers, leads Vanessa Redgrave and Timothy Spall are the whole show. There are next door neighbors who act as sounding boards and reality checks for the unsynchronized lives of the eccentric Lowry’s. Otherwise, there is nobody. Criticized for the lifeless “stick men” that populated his paintings of mid-20th century industrial life, Lowry considered himself to be little more than that. Failing in the eyes of the public and his mother until her death in 1939, the success that came after that was nothing, because he could never present it to her.

Spall must do that hardest of acting, with the camera right in his face, showing his mother’s words penetrating his emotional plexus like gamma rays piercing a liver; thudding home with one little punch after another, each one its own little hurting concussion. For Vanessa Redgrave, acting a nervous woman seems so natural it is hard to believe she is acting.

Without listing the myriad previous awards and achievements of the two actors, the parts of Lowry and his mother seem to have been made for them. Or, perhaps, that they were made for the parts. Such is not the case, obviously, they are only acting. Just try and remember that, watching this movie. You will find it impossible.

The limited cinematography is a perfect aperture through which to view Lowry’s limited world, and his escapes to the countryside. It is the wonderful music of Golden Globe and BAFTA award winner Craig Armstrong that shows inside the painter’s head.

Among his other achievements, none is more telling than the artist’s record for the most honors declined. He declined the OBE, the CBE, knighthood and the CH twice. He did not do any of that as some sort of esoteric political statement. He declined the honors, because, in his own words, after his mother died, what was the point? Indeed.