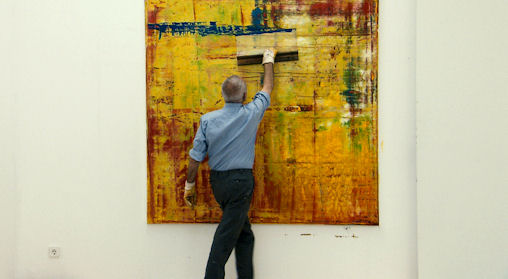 He takes three colors — red, blue and yellow — and stripes them in arcs and jutting angles onto a large canvass. Beautiful balance, natural primary colors. Simple and elegant. Then he spreads bright yellow paint onto a long wedge, as if buttering the length of French bread. Then, carefully, he slaps this long wedge to the top of his painting and, pressing evenly, slides the wedge down the façade.

Richter’s work of the last several years has been a work of obliteration, of transformation, of hiding and of recreation. It depends upon your perspective — but it is a kind of art that is enriched in significance by knowing the process.

Gerhard Richter cannot be typified by just one kind of art. He is an experimenter as well as a curious artistic innovator. This documentary is not focused on his life and chronology of artistic expression. It is centered on how Gerhard paints today. The beautiful young wife, their little child peeking in, the museum appearances – these are all brief.

Mixing colors, spreading paint, puzzling over what to do next in his creative process, Gerhard, at 79, is one cool dude. He is asked many questions about his work, but it is always difficult for him to respond.

A woman’s voice remarks, “The paintings have changed a lot.”
Richter responds, “Yes, yes. That’s the thing: they do want they want. I planned something totally different. Pretty colorful .”
The camera pans to his works on his studio walls – they are almost totally black.

One of the wonderful things about Richter is that he has experimented throughout his career with different kinds of artistic expression. This film shows him, hands plastic-gloved, in a visceral, kinesthetic involvement – brushing thick, smooth colors onto a canvas, sans smock or anything covering his nice shirt and slacks. He has a simple, natural feel for color, balance and movement that mesmerizes the viewer as the camera reveals him in his act of creation.

At one point Richter takes the camera to a series on the wall. There is a black and white photo of individuals standing around a bonfire. Even though Richter was born in 1932 and was just a young boy during the Holocaust, he was affected by the horrific history. Here is the exchange with an interviewer:

Richter, pointing to a black and white photo: And that’s an astonishing photo. It’s fascinating how peaceful it looks, how normal. When you look closely, they’re having a nice little chat. But this is the commando [he points] that was forced to burn corpses.
(camera goes in)
I can’t explain it. It’s crazy. He’s standing as if balancing on a log. So normal.
Woman’s voice: Can you remember the first time you saw something like this after the war?
Richter: At the academy in Dresden right at the start. American documentary photography.
Not smuggled, but somebody had it and we looked at it. It hasn’t let me go since.

One of the most obvious aspects of Richter’s work is that the viewer is left to interpret his work from a variety of perspectives. In relation to the paintings he smears and eventually hides with gray or yellow, I can’t help but wonder if that’s something we all do, just to survive another day with some modicum of happiness or contentedness. If we lived with the daily recognition, underneath the façade, how could we go on? 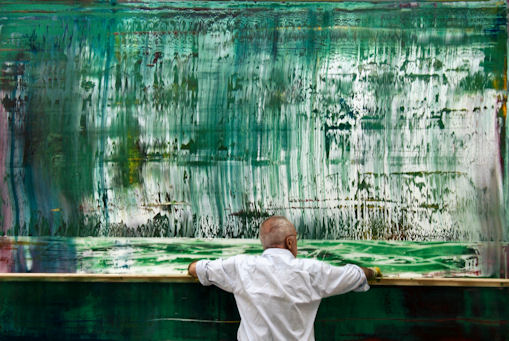