Chad Taylor (Chad Tailor – “B.D.R.M.,” “Resist”) is returning to his Canadian small town home of Harriston for the funeral of a friend. Chad is an indee film maker, and has his camera with him, something that is not welcome at the funeral. He leaves the funeral and is waiting outside when the attendees come running out of the church, screaming. Rushing in, he discovers the dead woman, Lisa Harris (Melie Rondeau – “Orbit,” “Ripples”) emerging from her overturned coffin, alive and growling. After a chase through the church, documented with Chad’s hand-held camera, she disappears.

They arrive back in Harriston to discover that Lisa still has not been found. After a night of some drinking and a little weed with wheelchair-bound friend Chris Laskin (Chris Kelly – “Be There”) they discover Lisa standing in the snow in the dark. Lisa rushes them and they all run – Chris wheels – to get away from what seems to be a re-animated, raging, madwoman. She catches Chris but, to everyone’s surprise, rather than brutalize him – she cures him. Not only that, she imbues him with feelings of joy and goodwill he’s not felt before. The word spreads and soon many townsfolk flock to Lisa for cures. She does not disappoint.

However – there’s always a “however” with these movies – there are ominous signs: Lisa stays in a dungeon-like room in her parents’ basement; she devours a live cat; the people she heals form a cult-like devotion to her; the local priest and assistant think something is very wrong; the recipients of Lisa’s benevolence begin erecting strange symbols in their snow covered yards.

The story takes several predictable and unpredictable turns from that point until its final resolution.

The jerky hand-held photography does fit in with the storyline and makes a variety of high-energy scenes affordable with a miniscule budget, but it does get in the way at times. Fortunately, there are also times when the camera is “set down” so we can see all three filmmakers in the same frame. The acting is workman-like, but that isn’t a criticism and fits in well with the “just simple small town folks” feel that is intended. One exception is Chad’s mother Nicole (Nicole Fairbaine – “Liquormen”) who creates very real senses of apprehension, paralyzing fear, outright terror, rage, and finally despair. In fact, the entire production excels in developing a sense of mystery that morphs first toward joy and finally into full blown horror.

Filming was done in actual buildings in Ontario, Canada, meaning many areas were narrow, and/or low-ceilinged, creating a claustrophobic sense that raised the tension.

Cudos to director and writer Ali Akbar Akbar Kamal for creating a tightly woven mundane-small-town to nightmare-village visual story. There are flaws, and character development doesn’t intrude, but the resulting film is an impressive decent into terror. 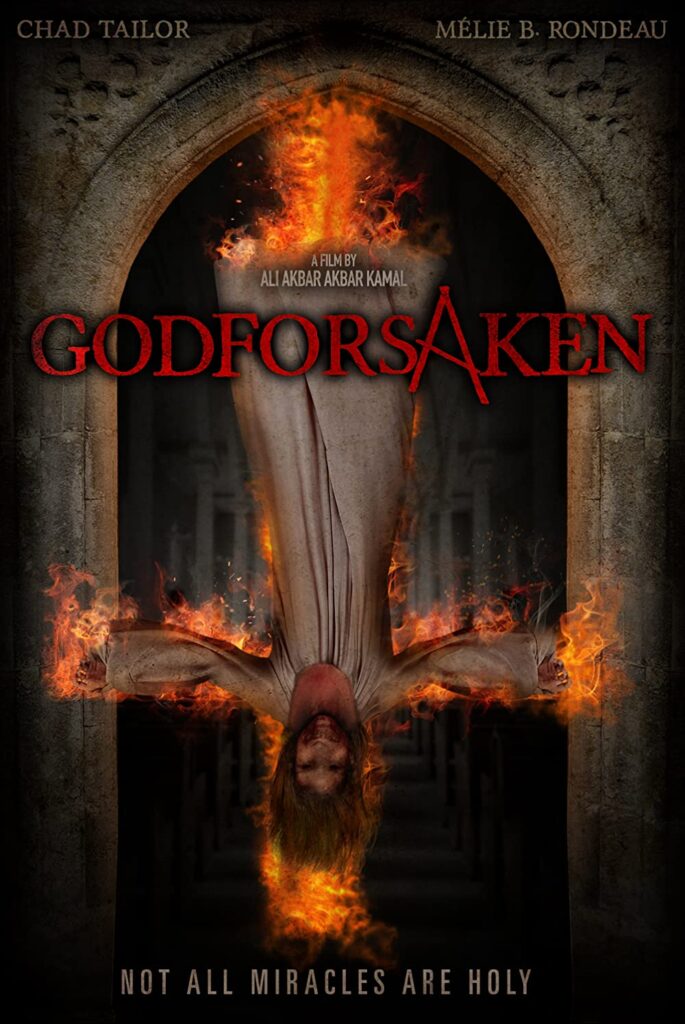