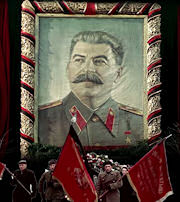 On March 5, 1953, Joseph Vissarionovich Stalin, absolute dictator of the Soviet Union, died. For three days, he had lain in a coma as his condition declined following a massive stroke. For 31 years, from 1922 until his death, he ruled Russia and its vassal states with a will of steel (he took the name Stalin, derived from the Russian word for steel) and an absolutely ruthless disregard for human life. It is estimated that he directly or indirectly killed more than 40 million Russians and other people during his rule.

Yet, to those who were not affected by, or knew nothing of his wrath, he was the beloved benefactor, even “Our Father” of the Soviet state. In this, he was not unlike the repressive Romanoff Czars, the “Little Fathers” that preceded him.

Director Sergey Loznitsa has used archival footage taken by Soviet photographers – some in color, much in black and white – to paint a picture of this pivotal point in Soviet history. How could such a monster, who sacrificed millions to force the USSR into the industrial and technological 20th century, who starved millions to accomplish collectivized farming, and who enslaved millions in the vassal states he created in eastern Europe after WWII – how could such a man still be viewed by millions with the reverence normally accorded only to the most saintly?

Director Loznitsa shows us. The opening footage is of Stalin’s casket being installed in the Hall of Columns in the House of Unions in Moscow. His body is raised at an angle for easy viewing and banked in flowers. Then attention is turned to reports of his death, delivered in the florid style of authoritarian propaganda, but with remarkable detail as to his stroke and gradual decline over three days. Struck down, but in three day he rose, at least on his catafalque.

The Soviet Union covered 11 time zones and 100 distinct ethnic groups. Footage showing the stunned, reverent, and often tearful reactions on thousands of faces across the huge nation runs again and again as loudspeaker propaganda praising the fallen leader drones on and on. A sense of hopelessness, of helplessness, of alone-ness – as if deprived of a doting and protective parent – is imparted by that endless droning.

Dignitaries from the vassal states arrive. Even Chou En Lai from China flies in. They gather with the members of the Central Committee on the viewing platform of Lenin’s mausoleum. Familiar faces appear in color: Khrushchev, Malenkov, Baria, Molotov and others. They praise Stalin, raising him to the level of immortality – if not in flesh, at least in memory. Malenkov states that “his deeds will be remembered forever”.

Then the bells ring out, the artillery salutes roar salvo after salvo, and the mighty industry of all the Soviets grinds to a halt across all those millions of souls and thousands of miles, as Stain takes his historic place next to Marx, Engels and Lenin.

It is a remarkable feat of documentary film-making. Every moment is made up of sights and sounds from those fateful days 69 years ago. The only insertion from our present day is a set of text screens after the last fadeout. They remind us of what Malenkov surely did not mean when he said in his eulogy that Stalin’s deeds would live forever. Today he stands alongside Adolph Hitler as one of history’s worst mass murderers. Withing three years his cult of personality was condemned by those who fawned over him in life. Within eight years he was removed from Lenin’s mausoleum and buried with other minor revolutionaries near the Kremlin wall. 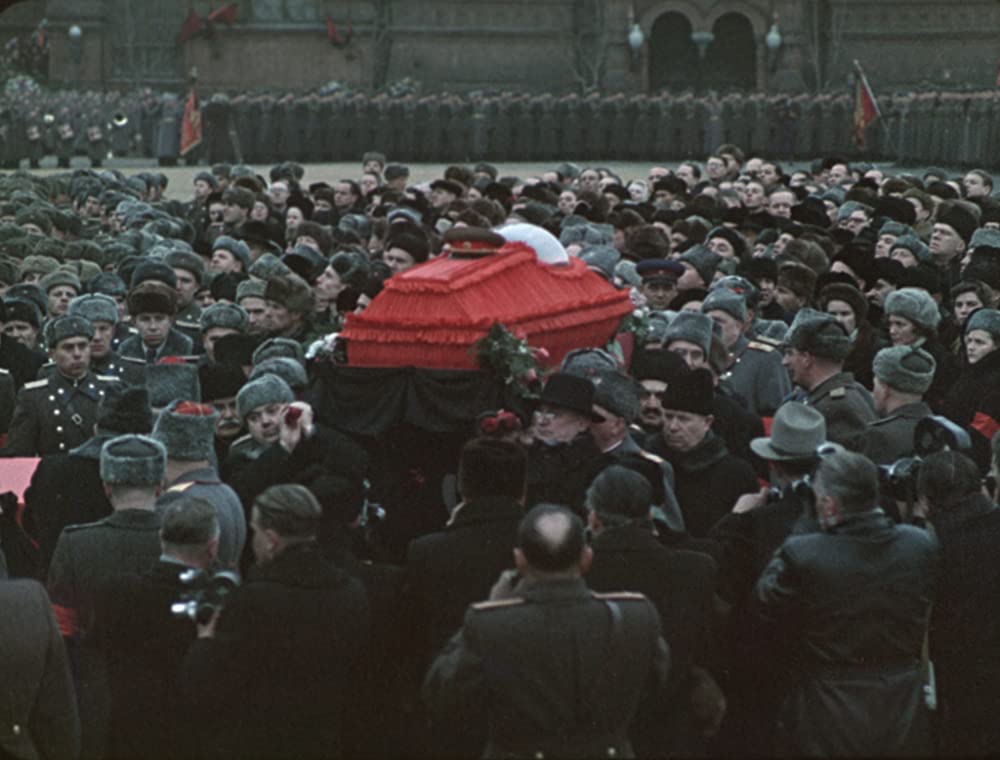 The film is currently available on MUBI, available through Amazon Prime.