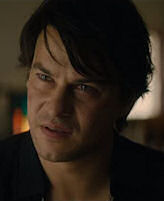 Is this a Canadian Godfather or is Godfather an Americanized Mafia? Against the original, this remake offers few surprises, just a further variation that crime does not pay. OK, it does for a while, but the geese come home to roost and the gangster realizes he has made a big mistake. Too bad, too late, kids die and the family is ruined. Life would have been better back in Sicily, especially with that bridge.

Based on a true story, or a few true stories woven together to suit the movie, Daniel Grou’s gangster flick is based on the book by Andre Cedilot and Andre Noel with a screenplay by Sylvain Guy. Frank Paterno is approaching grandfather age and wants to go straight after a lifetime of ruining countless lives through drug smuggling and other barely imaginable schemes. Vince Gamache is the ambitious son of the Paterno family’s tailor who feels rejected by his father and has no respect. Giaco Paterno is the reluctant heir apparent to the crime empire.

Wrapping together the tropes of the last big deal, man’s inescapable fate and over-the-top hubris the movie lopes from one gritty gangster episode to the next at an entertaining pace. The effort to become an epic at 143 minutes becomes a bit much towards the end as the thinness of the main characters starts to show. There is no ratcheting up of tension just a steady increase in the blood volume. Dull moments, yes a few, if too few to mention.

Sergio Castellitto is introduced as Frank Paterno making a phone call from a deserted dirty pay phone booth in a run down parking lot. Typical of the best scenes in the movie this encapsulates the worst of all worlds occupied by the best of all businessmen. Frank has made his own rules and now he must follow them. He is being watched all the time and his back has a target on it. Henchman Yap-Yap (Antonio Iammatteo) initiates a behind the back deal and is hung up with the hog bellies in an oddly ineffectual torture scene that could have been done better off camera.

The heavy lifting lands on Marc-Andre Grondin as Vince Gamache. Possessing outsized anger at a life that is really rather good, he commits the most heinous crime imaginable to get his foot in door of the drug trade. Giaco Paterno (Donny Falsetti) swears allegiance to Vince after Vince saves his skin in a light-duty street rumble. Falsetti will be doomed to a cipher role as the mirror image of Vince. He is Vince with a conscience or without a spine, depending on the point of view.

Mylène Mackay injects a welcome bit of female empowerment as Sofie Gamache, wedded to the Paternos and headed to win it all her way, even if that requires her own betrayal of wayward brother Vince.

A better Godfather? No way. Even so, first rate production, camera and soundtrack make this a good movie from start to finish. Do not try the hog belly thing at home.