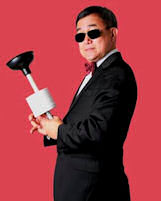 “When you turn 007 upside down it spells LOO and it’s such a perfect opportunity not to be wasted,” declares Jack Sim, activist and social-environmental clown.

The film’s title is embarrassing and silly, but if you thought something like cancer, heart disease, or the opioid crisis are the number one health issues in the world, Mr. Sim, retired from the construction industry in Singapore, has something for you to ponder. Sanitation.

Poor sanitation breeds disease and in this very funny video Sim, self-proclaimed Mr. Toilet, tells us that unless he makes toilets sexy and sanitation funny, no one will be interested in his movement. Ahem. So, he cavorts in a costume of a man on a toilet, wears a hat that is plastic doo-doo, and has big plastic plops of excrement as floaties in his swimming pool.

In between the promo antics he lets his audiences know that “almost 1 million children die every year from diarrhea due to lack of sanitation; that’s 2,000 children a day.” He squeezes in more dire statistics related to environmental degradation, crimes against women, and food contamination all due to the lack of a toilet.

Lily Zepeda, an intelligent new filmmaker, was first inspired by the Bill and Melinda Gates Foundation Toilet Competition. Upon researching the statistics, she learned that “more than 2.4 billion people lack access to a safe, clean toilet. That means more people in the world have access to a cell phone than they do a toilet.”

Then she was introduced to Jack Sim over the phone and a movie was created.

In the film are reality-like tv confessions from Sim’s family members lamenting his absence because in his sanitation obsession, he abandons his three children and wife for long periods of time. Furthermore, his own company, the World Toilet Association, disbands in protest because Sim is long on ideas, trips, and talks but short on fundraising and installing toilets. The villagers without a sanitation infrastructure don’t need to be sold on the idea of having toilets – they beg for them.

Sim points out that they all have cell phones, many even have tv’s – why not put the money they used to buy those things into a village sanitation infrastructure? One young girl dryly counters, “We need a cell phone to keep up.” The village men beg him to develop the infrastructure for them, not convince them they want and need public and private toilets. This is the crux of Sim’s problem.

Sim is a great pitchman, but he needs to do the fundraising to follow-through. The film shows his attempts, his awards, and how he works to inspire and encourage government leaders to step up.

Zepeda’s “Mr. Toilet” is really not the glorification of Sim or even the telling of his life, it is just the vehicle she uses to convey the message about how toilets can affect a community’s health, its women, and its environment.

“Mr. Toilet” opens at Laemmle Monica in Los Angeles on Nov. 8, at Village East Cinema in New York on Nov. 22, and screens at DOC NYC on Nov. 14.