Review: Paul Sanchez is Back!

Paul Sanchez Is Back! And we are all Paul Sanchez! A loopy curve ball of a flick that gets wackier and wackier until it is not anymore. A mysterious mass murderer who killed his family, burnt their bodies and then disappeared has been spotted by locals. All the south of France is buzzing, but the local gendarmes remain unconvinced. That is, until the pool and spa company van is stolen and a wealthy citizen is robbed. When the chief of police is overpowered in a local stream and his gun stolen, things get serious, in more ways than one. 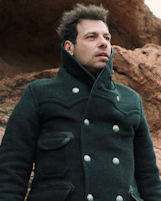 Presented by Film Society of Lincoln Center and UniFrance as part of the 24th edition of Rendez-Vous with French Cinema screening in New York City, Patricia Mazuy’s multi-dimensional dramedy has its North American premiere March 8.

Two-time Cesar Best Supporting Actor nominee Laurent Lafitte plays madman Sanchez on the run. As it turns out, Sanchez is pretty good at it, stealing vehicles, food and money and hiding out on the giant rocky mountain outside of town. The mystery is whether the locals have really spotted the deadly psychotic, and, if so, what is the reason for his return.

Hilariously slow to figure out there really is a villain on the loose, the gendarmery guarding the nearly crime-free upscale region by the French Gold Coast is asleep at the switch. That is, except Marion (2016 Cesar winner for Most Promising Actress Zita Hanrot). The ambitious sergeant smells blood, fame and fortune, and sees her name in lights. Her mistake is not her dogged pursuit of the perp, it is her mixed agendas. No matter, she has the clues she needs and, apparently, a sixth sense for tracking murderers in the wild.

Thereafter follows a goofy chase between Paul and Marion until the final showdown. But it is not the final, final showdown until a background player has his say.

Philippe Girard plays the local station chief, resurrecting a feckless Keystone Kopps role and looking tantalizingly like J.K. Simmons in “Burn After Reading.” Idir Chender plays aggressive reporter Yohann Poulain who is as adept at bedding a source as he is at filing a scoop. Frustrated with the prevailing news media that makes up more news than it reports, he is obsessed with setting the record straight, but he may be underestimating the media machine, or over estimating himself. Romance has its way with throw-away love scenes that come back to haunt in the final scenes when we get the whole story. The martial drums of the ominous soundtrack by John Cale lend the first half campiness, and the ending severe.

The fifth feature from Cannes winner and twice Cesar nominee director Patricia Mazuy (“The King’s Daughters”), this movie packs a lot into a modest 110 minutes. There is snarky social commentary galore, with dark humor jabbing the hapless police department and a brainless press. The ruthless nature of profit obsessed capitalist swimming pool sales and installation is juxtaposed with the frustrated screams of the worker Sanchez. “Never mind about the cement mixer injury!”