Felix Herngren’s comedy “The 100 Year Old Man Who Climbed Out the Window and Disappeared” has made a big splash in European markets but is going to have tougher going in the USA.

Although the film will probably unseat the reigning champion “The Girl With the Dragon Tattoo” at the box office, its extreme creativity is hamstring by its pronounced lack of dynamic. A remarkable stream of outrageous and funny episodes, one could take the first, replace it with the middle or last, and have the same film.

The Swedish-language comedy is co-written by the director and Hans Ingemansson. Based on the novel by Jonas Jonasson, there is plenty of material here for good old fashioned slap-stick, physical comedy. Like “Forrest Gump,” the protagonist runs into, and co-writes history with, a stream of heavies from Joseph Stalin to Ronald Reagan. Unfortunately, it takes more than a string of funny vignettes to make a movie. It takes acting, and this film does not have it, in spades.

The movie stars Robert Gustafsson as Allan Karlsson, a bored resident at a retirement home who is about to celebrate his hundredth birthday. Only minutes before his celebration, Allan climbs out a window and walks away. Buying a ticket at a railway station he accidentally steals a suitcase containing millions of Euros belonging to a cutthroat drug-trafficking ring. The ensuing chase by the drug ring is countered with a casual and semi-random stroll around the world by Karlsson and his new-found band of big-hearted and marginalized pilgrims.

As both cops and robbers pursue Karlsson everywhere known to man, fate intervenes repeatedly to save him and his companions as they help the good guys and avoid the bad guys. In the end the good guys do OK, the bad guys pay for their sins and the viewer falls asleep.

If comparing the film to “Gump” the first thing to note is the lack of acting. The main character is a man portrayed as being on the verge of Alzheimer’s. He has almost no change of expression and his two new found friends, one old and one young, appear the same way. Nor do they have much of an idea of what is going on around them. This is only entertaining for about the first twenty minutes. After that it becomes something to be endured rather than enjoyed.

The characters of the famous people in the movie are quite funny. All the more so for the fact that the film maker (and perhaps the original author as well) does not attempt to portray them as the “outside world” saw them. The viewer is not only an insider, but someone who is part and parcel of dissembling the legends surrounding the rich and famous.

In the end, the physical comedy is only fun to the extent that we can get past the numbing uniformity of the events themselves. As the story draws to a close we are able to write the next pratfall as easily and smoothly as the authors themselves. Even worse, we have stopped waiting to see what happens next because of the predictability of the expressions and lines of the characters themselves.

This is good clean fun, but no “Forrest Gump.” 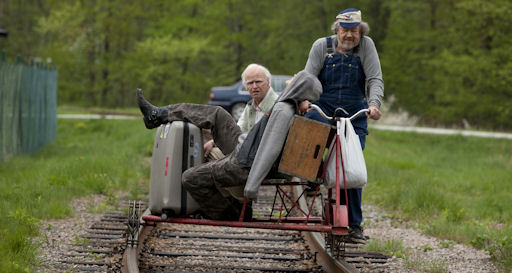