Review: The Shape of Water

The month of December brings out the big guns. The biggest stars and the biggest screenplays. Unfortunately, most do not make use of the stars and the screenplay. “The Shape of Water” not only makes use of a perfect cast, it leverages that with a charming story of love in the most unlikely of places.

The place is a secret defense research lab during the cold war of the 1960s. Octavia Spencer jumps out from her powerful Oscar-winning performance in last year’s “Hidden Figures” as Zelda, one of a pair of forgotten cleaning women. The two women are as forgotten as people can be, scuttling among the elite military – the best America has to oppose the communist threat. Spencer is paired with Sally Hawkins in what may be the best performance of Hawkins’ career. If you saw her get the Oscar nod for “Blue Jasmine” or her Golden Globe-winning performance in “Happy-Go-Lucky,” you owe it to yourself to see this film.

Hawkins plays Elisa, a woman who cannot speak but has full hearing. In the off hours of the night while cleaning the lab, she meets and befriends a sea creature, “Amphibian Man.” The amphibian was captured from distant seas and brought to the lab by security head Richard Strickland, to be used for research as a weapon of war. Although Doug Jones is in full costume, his portrayal of Amphibian Man is pitch perfect. With due credit to Guillermo del Toro’s direction (also co-wrote the screenplay with Vanessa Taylor), Jones performs the miracle of being alien without exploitation or trivialization. The amphibian is a symbol of what we get, and do not get, when we are at war not only with our enemies, but with our planet.

Michael Shannon uses his former, formidable persona as fallen FBI agent Nelson van Alden as a springboard for the darkly comedic security guru Strickland. His performance drips with manic hubris and bloodthirsty danger as Strickland lurches and lunges from sexual harassment to psychopathic cruelty to masochistic self-doubt. Without having a clue he tramples over the best that life has to offer, concentrating only on gratifying his boss (Nick Searcy, bordering on Dr. Strangelove) and retaining his marginal honor.

Top-notch performances by Richard Jenkins and Michael Stuhlbarg round out this dream team cast. The music is by seven-time Oscar nominated Alexandre Desplat (who won for “The Grand Budapest Hotel in 2014). His well-deserved Golden Globe nomination for this movie is his ninth. Danish cinematographer Dan Laustsen is spectacular in contrasting the bleak walls of the war facility with beautiful underwater scenes, including the outrageous flooding of Elisa’s slum apartment and the subsequent couplings therein (or thereunder). He has already won numerous awards for his work in this film.

A simple story that balances fantasy with allegory and thrilling action with deep introspection, “The Shape of Water” is another vibrant statement by del Toro. The film is quite comparable to his Oscar nominated “Pan’s Labyrinth” and has already garnered two Golden Globe nominations. 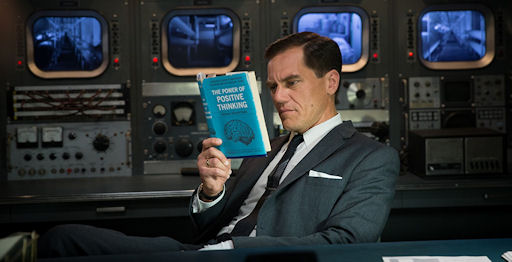