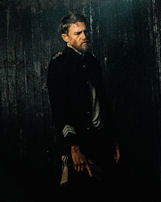 George MacKay wanted to cover all the bases and appearing as the luckless and legendary Ned Kelly and the plucky and traumatized Lance Corporal Schofield in two films opening in Australia on the same day did it. On the other hand, the stark grace of “1917” so overpowers this Aussie cowboy mash-up that in hindsight it should have been left in the bush.

Emerging director Justin Kurzel sticks to familiar ground in bringing Peter Carey’s Kelly Gang novel to the big screen. Reuniting with screen writer Shaun Grant from their successful Cannes award winning “The Snowtown Murders” the director and writer try, unsuccessfully, to breathe new life into a story already fancifully recounted nearly two dozen times. As with the equivalent Jesse James, Billy the Kid and Wyatt Earp legends of the USA, and Robin Hood in England, the truth needs considerable embellishment to be interesting and the embellishment usually includes the unpalatable.

The legends have it that brutal, ignorant and regressive authoritarian power (Sgt O’Neil, a lost and confused Charlie Hunnam) led young and innocent mavericks on unintentionally murderous rampages of revenge. Boys will be boys and the human spirit can only take so much before Smackwater Jack takes up his shotgun. Wives, mothers, fathers, sons, sisters, cows, horses, dogs and female outer wear are tortured, stolen, bought, sold, violated, beaten, eaten and color mismatched until enough is simply too much.

In real life, most of the personalities involved would have turned out normal human beings with a modicum of psychiatric counseling, three square meals a day and mild medication. Thank goodness that did not come to pass, or where would Hollywood be?

In the midst of the cacophony, Russell Crowe provides welcome rational relief as psychopathic killer and senior bushranger Harry Power. Amongst the muddled personalities and inner conflicted demons, Power is refreshingly focused. Robbing money puts food on the table, but he mainly just wants to kill people. He becomes the empowering mentor for MacKay’s Ned Kelly, wising him up to his proud warrior ancestry, introducing him to books and the power of science. Showing him how to shoot a gun and forcing him to use it.

Firearms are principal characters in the screenplay. Often pointing at protagonists who successfully dare fate, the guns are more usually impotent proofs of courage than instruments of death. So much so that by the time of the final Gunfight at the OK Corral the viewer is gratefully anticipating universal glorious death, a Butch and Sundance oblivion to the tedious, sophomoric Shakespearian rhetoric.

The film gleefully squashes those hopes, dressing up the Kelly Gang not only in inexplicable women’s wear but in strange but true homemade armor. The armor, pounded from hardened steel plows, deflected bullets which were aimed at its one hundred pound mass but left the lower two thirds of the body unprotected. Ouch. Had Harry Power been more thorough with young Ned’s armor engineering class, history might have been different.

A good test flight for better things to come for this talented cast and crew.