Under Review: ‘No One Killed Jessica’

Bargaining is the way of life, the centerpiece of business, in the traditional cultures all over the world, but most famously in the Middle Eastern-Subcontinent regions. Depending on what’s said and what the bargaining is over (an extended Visa, perhaps?), the Westerner can construe this talk of prices as unfair practice or outright acts of bribery and corruption. 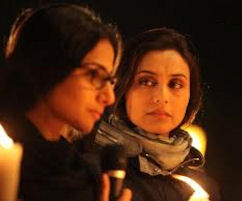 When it came to a murder case in this film, everyone thought, since the murder was done at a large gathering with several witnesses, that the case was open and shut. There would be no way that the accused could be acquitted, even though he was the son of a prominent politician.

But this is how it went. The witnesses, desperate for financial security, were paid to change their stories or just remain silent. Forensic evidence was stolen, for a price, by the police involved in the investigation.

The courts went through standard procedures, but despite being tipped about the bribes, witness tampering and evidence theft, they acquitted the perpetrator.

My fourth foreign film review, this time written from Bangladesh, is set in India and presented as historical fiction though based on the true story of Jessica Lall, who was murdered in 1999 in New Delhi. It catalyzed a nation into successfully overhauling its legal system through demanding justice.

Showing Indian moxie and frustration with a system catering to money rather than justice, a wellspring of support for the victim’s family developed. The victim’s sister led this crusade, with marches, candlelight vigils, rallies and the support of a popular journalist. Remarkably, this popular rally influenced the court to re-try the case.

Learning about other cultures from their films is an interesting pursuit and always colored by the analyst’s own experiences and values. After living this summer in Dhaka, Bangladesh, I see in this film a firm patriotic pride. In this age of Yes We Can, I see a tribute to and acknowledgement of the power of citizens and democratic principles. When people mass together here or anywhere in the world, as we are currently seeing throughout the Middle East, there is a greater chance that change can occur and cultures can evolve with fairness and security.

It’s change imposed by the people not on the people that is most often effective and long lasting. As India emerges as a strong economic and political power, this desire from its people for a just society based on the laws of order is a logical progression. The pride the viewer notes in the production is because India, like her sister nation Bangladesh, is evolving on her own.