Under Review: ‘The Chef of South Polar’ (aka Nankyoku ryôrinin) 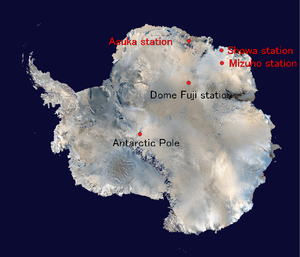 Eight Japanese men in the prime of their lives are sent to a desolate outpost deep in Antarctica for 414 days. Their job is to mine ice cores that document climate change through the last 300,000 years. But 414 days is a long time. Sometimes the sun never sets and other times of the year it is never seen. How will the men hold up?

Nothing lives in the environment outside Dome Fuji Station. Its temperature in winter can reach -80 degrees. In summer, it can rise to -30 degrees. It is known as one of the coldest places on earth because it is not only located deep in the Antarctic inland, it is located on a large windy ice plateau 12,500 feet above sea level. In addition, it gets its name because its elevation is close to the height of Mt. Fuji which stands at 12,389 feet.

The playful story of “The Chef of the South Polar” centers around the survival of these eight Dome workers. Some prepared for years and wanted to come. But the cook, who is reassigned from his Coast Guard position, is ordered to leave his family and be the station chef.

The real danger these men face is less the cold, risky environment of the Antarctic than their own demons and the potential break-up of relationships back home that they hope will survive this extended separation.

At the center of their life is the dining table. Here the cook, played by Masato Sakai with an artistic grace at the cutting board, tells the men that “delicious meals make people happy.”

It is at this table, in the end shown illuminated by a beam of light as if being blessed by a supernatural or sacred power, where the men are nurtured. They are always grateful, cheered up and replenished while eating the fabulous meals of the cook.

Dome Station could be looked at as a Japanese “No Exit” where hell becomes the inescapable others in the room. At some point in the claustrophobic ice prison the men crack. They reach their abyss, couched in familial rejection, their interpretation that this job is a demotion rather than promotion and fissures cut in their own stability.

It is at this point that they run out of ramen, the noodles they love that were a staple of their existence. Their culture is not there to support them and they must shift if they are to survive.

This is the classic voyage of all heroes who accept a call. At some point through the challenges there is a break and the hero must make a shift in order to get through this and improve as a human being.

Amidst this potential for misery, “The Chef of South Polar” is billed as a comedy and filled with plenty of laughs. This delightful film is being shown as part of the Pacific Northwest Japanese Film Currents on Dec. 2 and 3 at the Whitsell Audiorium.