Under Review: ‘Force of Nature: The David Suzuki Movie’

“It kind of feels like kind of a rap of what I’ve been doing. It really is a nice completion. I can just go home and die now.” 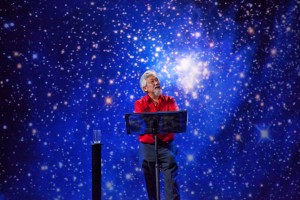 That’s what David Suzuki says about his 2009 lecture at the University of British Columbia in Vancouver. However, at 73, Suzuki is an incredibly handsome, fit, energetic intellectual visionary with no signs of slowing down. His charisma, passion and emotional sensitivity radiate in this capture of his Legacy Lecture, based on his question: “If I had one last lecture to give, what would I say?”

Suzuki has been saying things eloquently for a long time. He is a world renowned scientist, activist and media personality whose Canadian TV show, “The Nature of Things” has been syndicated in almost 50 countries since 1979. He is also acknowledged as the Father of the Canadian environmental movement.

The film is intermixed with an eco-lecture, autobiographical anecdotes and footage from his life and period experiences.

Of all the acclaim and personal recognition he has been given, Suzuki states that the bombing of Pearl Harbor was the defining event in his life. Even though he and his parents had been born in Canada when the Canadian War Measures Act was applied in 1942, their rights of citizenship were suspended. Their property was also confiscated, their bank accounts frozen. In an ultimate humiliation his father was shipped off to a road camp and the rest of the family to relocation centers east of the Rockies.

Coming out of the camps Suzuki was full of self-loathing. While he had been rejected by White society, but his first experiences with blatant personal discrimination had occurred in the camps where he had been taunted and chased by the Japanese children because he could not speak Japanese.

In his loneliness, which was present throughout his early life, he found solace and wonder in nature, fly fishing in the Canadian rivers and exploring the swamp waters near one of his homes. This ended up being the foundation for his life’s calling, speaking on behalf of our inextricable unity with the world.

Produced by Sturla Gunnarsson, “Force of Nature” is worth seeing just for Suzuki’s explanation of how we are all connected to each other through the argon in air – connected to all people in the past, present and future. His comments on his fruit fly research, his work with the Haida Indians and the surprising results from that association are just a few of the reasons to view this enriching, masterful film.

Suzuki has been given numerous awards and recognition as an environmental watchdog. Though he refers to the intergenerational nature of environmental crimes, missing is his more vehement rhetoric on political ineptitude and ignorance. Several times he has called for Canadian politicians, including the PM, to be put in jail for their profligate, criminal inattention to environmental issues.

Suzuki’s theme is that “one species, us, is single-handedly altering the planet. We have become a force of nature. There is no environment out there and we are here. We are the environment … there is no separate. What we do around ourselves we do to ourselves.”

Suzuki’s Legacy Lecture is full of passion, logic and authority explaining our responsibility and obligation in the most hopeful and inspiring way he can muster.

a documentary by Sturla Gunnarsson 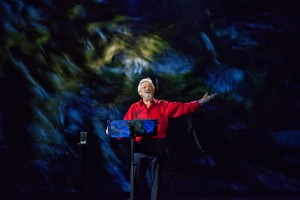