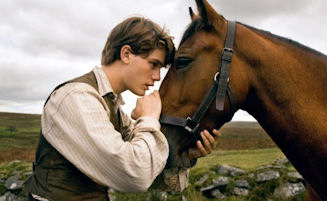 Not only is Steven Spielberg one of the most brilliant and influential minds of the 20th and 21 centuries in the entertainment industry, there is a certain feeling you get when watching one of his movies. The memory of your first Spielberg movie — whether it’s “Jaws,” “E.T.,” “Indiana Jones,” “Jurassic Park,” “Saving Private Ryan” or countless others — is associated with a certain feeling or grandeur and awe.

He has singlehandedly inspired many young minds to think and to create. Do I hold him in high regard? Yes, I do. He is a legend and has some of the biggest films of all time on his resume. Recently, he has been stepping out of the director’s chair to produce more frequently, but after more than three years, he is back with the dramatic and enchanting film: “War Horse.”

Based on the children’s novel of the same name set during World War 1, “War Horse” tells the tale of an unlikely friendship and bond between Albert (Jeremy Irvine) and a horse he names Joey. Bought out of stupidity, Joey is not the type of horse Albert’s father Ted (Peter Mullan) needed for their farm; he just didn’t want his landlord Lyons (David Thewlis) to get him for his spoiled son Gunther (David Kross). Much to the dismay of Albert’s mother Rose (Emily Watson), he begins to train the young horse, but when the fate of their farm depends on this young stag’s ability to plow a hard and rocky field, things seem bleak. But Joey and Albert show everyone that they are stronger and have the gumption to get things done.

When the time comes and Ted has to sell Joey to make ends meet, he finds a kind Captain (Tom Hiddleston) to take him. As events transpire in the war, Joey goes from owner to owner, even switching sides and becoming attached to two young German soldiers at one point and then making his way to a sweet young girl (Celine Buckens) and her grandfather (Niels Arestrup) on their fruit farm out in the countryside. Once again, poor Joey is pulled back into the war effort as a work horse for the brigade.

Years have passed and Albert has joined the army along with his best friend Andrew (Matt Milne). Both seem more eager to serve than to actually fight. In some way, Albert has a miraculous hope that he will somehow find Joey in the chaos of war. Everyone who comes into contact with him knows what a miraculous horse Joey is — even in the war-torn Somme of France in the midst of the battlefield he cannot be swayed in his path. Although they have been separated, over multiple years their connection and love for each other survives and each hopes to find each other one day.

“War Horse” is as beautiful as it is touching. Although it ties in a lot of Albert and his journey, the film focuses on the horse and its journey and the lives it saves and affects along the way. Taking a much more traditional routem, “War Horse” has the feeling of being purposefully old fashioned in the way it was made and how it looks. The shots are just beautiful, epic and organic at the same time — the landscapes it takes you through become characters themselves in the movie. These sweeping countrysides help narrate the film as much as the epic score by John Williams helps to paint the bevy of emotions you go through while watching it.

The cast is perfect, but the one person that jumped off the screen to me was Jeremy Irvine. His tender emotionality brings you right into his friendship between Joey and lets you feel the joy and the pain right along with him. I thought his connection with the horse was flawless and completely believable.

This isn’t just another “war movie” from Spielberg; it is much more than that. Imagine “Saving Private Ryan” mashed together with “E.T.” and “Seabiscuit.”

This enchanting film weaves the story of an ultimate friendship and its grandeur is just the type of movie that used to dominate the Oscars. I am sure it will be a major contender in next year’s awards. From the farm to the battlefields, across the landscapes and into the trenches, “War Horse” is a superb film that will have you entranced from start to finish and is sure to become a film you will watch over and over again in the years to come.

“War Horse” gallops into theaters today and is rated PG-13 for intense sequences of war violence.